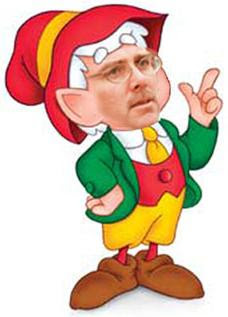 This week's Times Ledger contains a story about Councilman Dennis Gallagher's anticipated removal of 3 community board members for refusing to act as his marionettes:

Civic leader and CB5 member Robert Holden has said he believes Queens County Democrats and Republicans agree not to run candidates in certain districts so incumbents can stand for re-election unopposed. In a telephone interview, Holden said his request to bring an attorney and stenographer to an interview with Gallagher concerning his reappointment to the board were denied.

Can't blame him for wanting that session recorded. Not surprised that the Pinkster said no, either.

This follows QC's exclusive on how Pinky taunted an ex-Marine at a shopping mall and how Pinky continues his Napoleonic crusade.

In related news, it looks as though Queens Crap can cross the Middle Village-Maspeth Civic Association off of our Christmas card list this year (despite featuring their meeting as a community event a couple of weeks ago). Look at the ridiculous response one of their members received when they disagreed with the organization's obvious butt-kissing:

When harassment is an indication of mental illness

Crappy finds himself a little disturbed by this, for a civic association should be happy to see their elected officials held accountable for their indefensible actions, like removing people from a community board who are committed to bettering their neighborhood. It seems their only crime is disagreeing with their councilman on zoning changes and variances.
Posted by Queens Crapper at 3:00 PM

Pinky supporters like to spew their pre-k style nonsense about people who criticize him. Notice how they don't like to talk about the issues. Like how Dennis:

-Didn't give back or donate the cash from Brian McLaughlin after he was charged (he stole it from children, Pinky)

-Attempts to control the entire community board (he's only supposed to submit HALF the nominations, not ALL)

-Lobbies for zoning changes for Israeli developers so they can destroy a neighborhood in his district for profit.

-Skips council sessions to meet with lobbyists at the Parkside group.

-Has ZERO landmarks in his district

Any Pinky supporters care to justify these actions? Or would they rather continue their meaningless verbal diarrhea?

I wouldn't lose too much sleep over the MVMCA. They didn't even have enough people at their last meeting for a quorum so that they could hold their elections!

So the truth is finally coming out in the Queens press. It's about time. I know the local papers are beholden to the local politicians for their $$$$ because they take ads out for everything from Greek Independence Day to St. Joseph's Day. It's refreshing to see them reporting on the truth for a change.

What the hell is wrong with these people? Gallgher has no morals - a total sleazebag, and everyone knows it.

Ask him all about it at your next meeting.

Walking through Juniper Park the other day, I nearly stepped into a pile of Gallagher. Fortunately, since it smelled of JM, I noticed it early and avoided the mess.

This JM on the Gallagher civic is a true representative of his master. JM announces his pink panty-wearing, girly-boy name calling lickspittle credentials with his idiotic reference to the pile of Gallagher as a hero. Pinky a hero? For doing what?

Starting a civic whose motto is that it "Takes a village to raise a child"? Now this pile of Gallagher quotes the grifter Hillary?

Is there no bottom to this Pinky depravity?

He's so tiny, it's hard to believe that he hasn't scraped bottom many times, but, perhaps Pinky's place IS the bottom.

It is quite confusing how a veteran of the United States Armed Forces including the Coast Guard could with a sober mind confuse the concept of “Hero” with the likes of Dennis Pinky Gallagher. Evidently, the denotation of the word does not fit Pinky’s character; the only connotation of the word hero that fits is sandwich. Sandwich! Yes a bologna and cheese hero. But, if he is one of Pinky’s lap dancers that are receiving a redistribution of the taxpayer’s money then Councilman Dennis P, Gallagher, of course, is his hero.

Not to worry...Pinky will be out of a job soon. What to worry about is where he might go next....Stavisky/Parkside?

While Mc Laughlin may go to jail soon...the Staviskys (for the moment) beat the rap!

If I were an ex Marine, I'd have kicked Pinky in his pea sized nuts!