The Queens Chronicle reports that the Elmhurst library will be demolished and a new, larger structure will be built in its place:

"The original library is one of 1,689 free public libraries built in the country between 1883 and 1929 through funds provided by philanthropist Andrew Carnegie. Each boasts a distinct architectural style that was based on the community it was in.

Sadly, it comes as no surpise that the city wants to destroy another beautiful building in Elmhurst. Next thing you know, they'll want to tear down Newtown High School - thank God at least that's landmarked and can't be replaced with a cinderblock piece of shit. 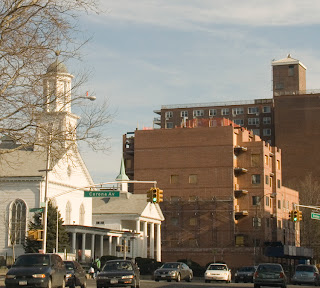 Here is a suggestion from Queens Crap - instead of tearing this building down, why not just expand the library into the latest piece of Huang family crap across the street and next to the Dutch Reformed Church? Since the city seems to allow them to build whatever they want regardless of the zoning code, and their latest Elmhurst creation certainly has the sought after 29,600 square feet, it would be a match appropriately made in hell.

First photo from Forgotten NY.
Posted by hooper at 1:30 AM

I think the attitude is:

1. This is an immigrant community. No one is going to say a thing.

2. Any 'leadership' in the community, as it is, will echo the things they are told.

3. The newspapers will go along (as the political connections the library has, see the demolition of the Astor school for crap posted earlier in the week)

That is scary, the connection between the cultural institutions and the developers. We knew they had the newspapers and politicians in their pockets, but ol Crappie just opened up a disturbing new dimension.

Perhaps in future pieces you can lovingly lay out each cultural organization on the table and we can dissect each board for the corrosive influence of perfidious developers.

What fun that will be!

Might go a large measure in explaining the notable dead zone when it comes to what passes for ‘culture’ in Queens.

Well at least the library is not stealing a children's playground like they did in Ravenswood.

Start with the board of Queens Theatre in the Park

This is a crime to destroy one of Queens' last remaining "Carnegie" branch libraries that was built during Carnegie's lifetime. Astoria & Flushing's branch is already gone.

To all: Don't give up & fight to retain the original structure. Many community residents are in an uproar already. I would be very happy if Tommy Huang's building across the street on 51st Ave gets the wrecking ball for an annex to the library. His project was illegal anyway! A travesty!

How's about it if we throw all those selfish politicians and the developers (who don't work with the community) in the crap pile?!? LANDMARK this fine institution at once! Once it's gone, it's gone forever.

What a shame. I learned to read in that little library where my mother would take me back in the days when pre-schools were something only kids with parents of higher means attended. Any chance the old Carnegie will survive progress?

NYC & its "friends" the developers (better make that destroyers) tears down historic libraries!

What can you expect from a totalitarian Mayor but an encore performance reminiscent of the 1930s!

By the way, NYC can alter, if they want to, or tear down and replace the landmarked Newtown High School if they wish.

City owned properties are exempt from following the landmarks law.......read it!

Excuse me, but the newspaper article also mentions, "the current proposal would increase that green space from 6,500 square feet to 9,960 square feet."

Learning is important, this library is almost always crowded. Today's Flushing library was also once a Carnegie library, but as the population grew- so did the library.

Yes, the city demolished the Flushing Library and rebuilt it to fit in with its Queens crap surroundings and this one in Elmhurst should do the same.

"I would be very happy if Tommy Huang's building across the street on 51st Ave gets the wrecking ball for an annex to the library. His project was illegal anyway!"

Has he ever built anything that was legal?

"Learning is important, this library is almost always crowded. Today's Flushing library was also once a Carnegie library, but as the population grew- so did the library"

Yes - no argument on increasing library space or green space. But tearing down one of Elmhurst's few remaining tasteful structures to do it is unacceptable, and shame on you if you'd condone that sort of project.

Correction....Mazeartist! As a 50 year resident of Flushing....I may know more about the Flushing library than you do.

The original Carnegie building was replaced in the mid 50s by a new building.....correct.

They tore down that new (50s) building, which was designed to be expanded (the steelwork would have accomodated 2 more stories).


Instead, in a boondoggle move, a totally new structure was built which cost taxpayers mucho $$$$$$$!

H-m-m-m....while the construction firm and subcontractors (and some of the local politicos) made out like bandits!

I remember the building that used to be on that corner, it was a store dating from the 1840, and with a few remaining buildings on either side, gave a hint of what the vanished Village of Newtown was like.

Why waste that idea on the people of Queens. They like stuff new and cheap and glittery.

Huang project across the street is completely illegal. There are probably over 40 dwelling units at the site without any off street parking. R7 A and B requires parking for 50% of the units.

God I wish Huang would just disappear. Although he isn't the source of all development problems, he's certainly at the core of a group of people who ignore zoning and DOB regulations. What is the point of even having the DOB if they won't enforce the laws they have sworn to uphold??? Huang needs to be arrested, and his assets should be frozen and eventually absorbed by the state, preventing all of his minions from taking control over his so-called "empire".

Is it true that Huang once bragged that he had a "back door" into City Hall and owned some judges?

That would explain a lot!