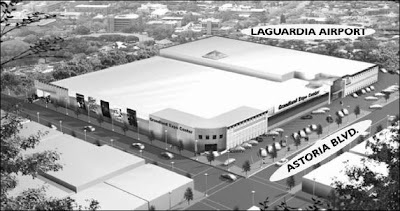 A recent press release from Greiner-Maltz reveals that a gigantic expo center is on the horizon for Astoria Boulevard:

“This development represents a change of land use from industrial (cardboard box manufacturing) to high value product showrooms which will transform a transitional neighborhood of bus yards, motels, and mixed use retail-office into a destination for merchants who are located throughout the entire Eastern Seaboard” reports Richard Maltz, Chairman of Greiner-Maltz. Further, geographically situated between the burgeoning Asian population of Flushing, Queens, and the rapidly repopulating industrial areas of Astoria and Long Island City, this transaction will “be the harbinger of a new development surge in Queens, which will add a significant vibrancy and economic growth impetus to NYC.”

Despite the company's claim that this facility is an improvement over the current land use, it is hard to image the construction of a commercial space of this size without a substantial increase in traffic. Also, take a look at the parking lot in the attached drawing. Does this look adequate for such a huge facility? Maybe they can define what "transitional neighborhood" means. Exactly where are those bus yards, motels and mixed use retail-offices going to go?
Posted by Queens Crapper at 1:05 AM

It is quite clear that the USA has opted to sell out to vested interests in the far east.....probably via Congressman Ackerman (who some believe ???? has been closely affiliated to the likes of Tommy Huang in the past, or is it present)???

We get two pages of dragon boat races in Ackerman's Tribune while Bowne house rots because its an exciting new cultural phenom.

Instead of the Queens Congregations United for Action snooping into other communities, why don't they get involved in stuff like this?

Look at all this land to be developed!

Do they go to where they are told?

The US Dollar is weak....the Euro is strong.....and China is booming!

I actually got this from a fortune cookie:
"With money....a dragon. Without money....a worm"!

That about sums it up. We're "sucking-up" to Chinese money that's been thrown around for decades (especially long time politicos like Ackerman).

His suggested early ties to convicted felon Tommy Huang, could explain why Huang continues to get away with breaking the law?

Let's not forget Councilman Liu and his million dollar plus campaign war chest waiting in the wings!

Is this what is meant by the new Chinese century?