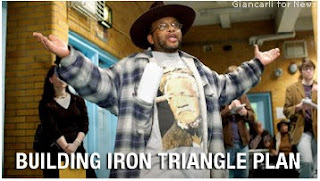 "It's a ploy," he said Wednesday night. "It's all ... smoke and mirrors. Basically, we're all being taken and we're all going to be out of business. It's disgraceful. We're the type of people who built America."

Claire Shulman will lead the organization, which will be called the Flushing/Willets Point Corona Local Development Corp., said spokesman Evan Stavisky. <-----and there we have it. McLaughlin came up with it, and Parkside is now carrying the ball.

Photo from Daily News
Posted by Queens Crapper at 7:43 AM

McLaughlin isn't bright enough to come up with a plan as ambitious as this.

Years ago a "proposal" was shown to Brian as well as other elected officials by Wellington Chen, VP of TDC, Fultonex, F&T and e888. Chen is also a former CB#7 member, BSA Commissioner and sits on the Board of Directors of numerous prominent organizations, including CUNY. All of this "planning" is to lure more far east investments into the Downtown Flushing real estate market under the promise of "urban renewal".

Shulman had the chance to do some good for these viable businesses under her reign as BP. She and her former boss, Donald Manes, caused the area to look "blighted". No money was ever invested by the city for infrastructure under the Manes and Shulman administrations. I'd say "shame on you" but people like Claire and her cronies don't know what shame is.

Evan Stavisky is everywhere. What doesn't he do!

Why did Wellington Chen make such a quick exit from his Flushing base to head up a Chinatown group?

Were things getting too hot there?