The hottest corner in Queens 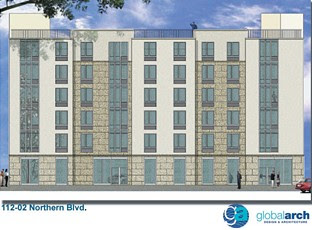 A couple of months ago, a 10-story, 130-room hotel was mentioned for the southeast corner of 112th Street and Northern Boulevard, and now a 44,000 square foot luxury condominium complex has been announced for the northeastern corner of the same intersection:

LEV Group's CEO, Eddie Shapiro, recently commented: "We are delighted that our new project is being embraced by the community and we look forward to offering the neighborhood new modern residences in this beautiful high-end designer building."

Yes, Eddie, the community has a history of embracing projects like this. So does Helen Marshall.

In case you didn't notice, Ed, this isn't a "high-end designer" community. Perhaps this is another attempt at forced gentrification?

Illustration from levdevelops.com
Posted by hooper at 1:10 AM

Is it because crooks support building them?

Why do developers always start off believing there is already community support for their planned project, even though the same developers met with no community groups, only with officials?

Oh! Oh! Now I get it! Somehow, the official convinces the developer that he/she speaks for the community.

Does money ever change hands?

Don't make me indignant! An elected official would be so corrupt as to take (or even demand) money from a developer?

Are you saying that there's a dollar link binding developers and municipal employees? Aren't there law that prevent that?

Wouldn't the Department of Investigations be keeping an ever-watchful eye out for these kinds of mistakes?

Isn't Mayor Bloomberg strong enough and honest enough to see that this would never happen?

Fie on you for suggesting any such deviations from the law! Next thing, you'll be saying that even Gallagher or Katz are totally dishonest! In bed together, so to speak.

Now where are they when something like this is going up? Snooping in and getting involved in other communnities like western Queens.

Do they go where they are told to go?

Are blind when they are told to be?

"In case you didn't notice, Ed, this isn't a "high-end designer" community."

And what's wrong with trying to improve the community with some new housing? Why do you assume that the community is going to be against this? It is possible that some communities might actually want some new residential buildings in their neighborhood.

And, by the way, this building doesn't look at all like a "correctional facility". It actually looks a lot better than a lot of existing apartment buildings in Queens.

How does high end housing improve life for the people that live there? Either there is a greater divide and more tension, or if the new housing really takes off, the existing community will get destroyed from gentrification. It's not like people in low or moderate income communities can afford the places that the yuppies like to shop in. Also, the yuppie condos tend to have everything on site, like a gym, which makes the residents even less likely to patronize local establishments, and they all seem to be "Fresh Direct preferred buildings," so there goes the chances of the common folks getting a new supermarket in the neighborhood.

I see. The community is opposed to new housing on the south side of the street, but on the north side, they will embrace it with open arms. That makes sense.

Who said the community needed to be improved and how will an influx of rich white folk improve it?

Let's see how Helen weighs in on this one. Can't wait.

Was Lev Developers blind, drugged, or severely drunk? Haven't seen many projects so unproportional as this crapsterpiece!!!!!! Why are they saying that it's being strongly embraced by the community? Did they count any heads?

Julie - Helen Marshall loves a photo op. I've seen her make an entrance in the midst of functions; some of which she was uninvited.

P.S. I pick all of the above. They built their own correctional housing.

Folks....this is all part of "the plan". (Not the one you'll be able to find at the Dept. of City Planning)!

First, the Asians are "imported" to make sure that "Blacks" are pushed out of Flushing.

Second, it's now time to push the Latinos out of Corona.

Oops, I forgot. Jackson Heights was made a landmarked historic district to make sure that it wouldn't absorb the "taint" of the stereotyped Elmhurst (Colombian) "drug dealing" image that the media was so strong on presenting 30 years ago!

And this new buiding certainly DOES look like a correctional facility!

speaking about forced gentrification,
this article by Prof. Agnotti is a read and will help people better understand the dynamics of such gentrification.