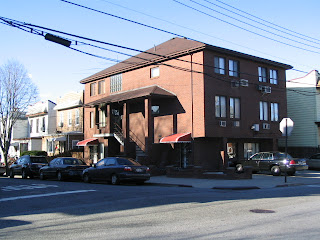 At 64-49 56 Drive in Maspeth you will find the essence of Queens Crap - even appropriately colored in brown. You get the feeling the builder was influenced by a variety of architectural styles here. Traditional windows are installed right next to a big glass block window. Red awnings seemingly stolen from a 1905 townhouse are right next to a larger crap-colored awning that covers a large outdoor staircase - borrowed from the side of a theater, perhaps. And of course the building showcases the mandatory Fedders-under-the-window, and cars parked on what should be the yard.

We call it the "Maspeth mystery building" because DOB does not have any new building permits filed for it under its address. City planning records indicate it contains 9 "residential units" but has 15 "total units." Use the city map and enter this address and you will see what we mean. City planning also says that the building was built in 1986, however neighbors will tell you that it definitely was completed sometime during the Bloomberg administration.
Posted by Queens Crapper at 1:00 AM

Not sure, ACRIS lists 1986 as the date that the mortgage was last satisfied, but that is the only document the system has on file for this property.

The American Institute of Architects has announced new categories for their highly popular "AIA Guide to New York City"...The following categories will be added to those mentioned above and ARE EXCLUSIVE TO THE BOROUGH OF QUEENS:

Classic categories, George! There should also be a general "Won't you be my neighbor?" category. Awards should be presented for the worst pieces of Queens Crap.

It looks like a military blockhouse at Fort Maspeth....built to fight off the "Indians"!

Hey Crapper...I like what Anonymous said about a sort of "Best of the Worst" Awards...Brain-storming here...Mebbe we could have a contest/suggestion list from the posters et al and actually send the Awards list out to the various media?...It could be an annual, semi-annual, monthly listing, whatever...On official Crapper letterhead?....Sort of like what's-his-name's annual movie star's "Worst Dressed" list.

There is a house on Kew Gardens Road and 82nd Rd. (?) near Lefferts blvd. that would put this house to shame... I haven't seen it on this site, so I'll be sure to submit it soon.

I like the ideas of awards....ahhh yes!.... The Golden Crappy Awards!

That Mystery Building was built in the Mid 80's. I know this because a friend of mine rented her first apartment there when it was first built