A Crap Above, part 2 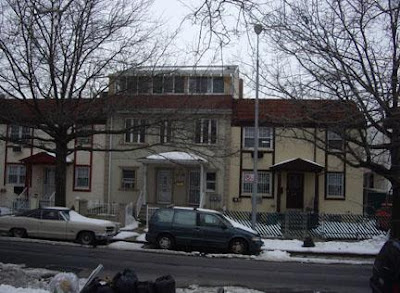 This "penthouse," sitting atop a two-story rowhouse, is on 110th Street near 63rd Drive in Forest Hills. When the add-on was built, the front was refaced and a second door was squeezed in for the upper apartment. Now it is the eyesore of the block. Sent in by mazeartist.

What a poor man's penthouse this is. H-m-m-m....they couldn't afford one in the Waldorf Towers.

So this ersatz offensive joke is their answer to "putting on the dog"!

It's not exactly sky high above the clouds.....is it!

Nothing ruins neighborliness than taking a uniform row of attached homes with style, and massacring it down the middle. Those homes always had protective measures, but I guess the board sold it or just doesn't give a damn anymore. SHAME ON YOU!!!

If one walks further down those blocks, they'll notice that one of the dwellings was McMansionized.

I am waiting for the spaceship, I mean penthouse crap to undock and fly off high above Queens.

That is so tasteless...

I'm waiting for the owner to install an outdoor toilet-commode that dumps directly onto the street below, all the way down from the top floor!

Why not? He's already shit upon his neighbors. He might as well do it for real!