They're coming for blue... 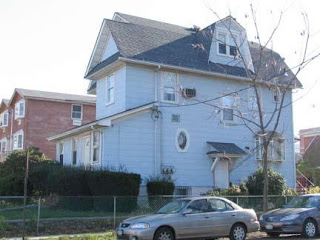 "The first sign, a few weeks ago, was when a decades-old tree in front of the magnificent old two-family house on 43rd Avenue and 161st Street in East Flushing was cut down. The developers of New Flushing despise old trees, and have little use for grass and lawns in front of houses, considering them undeveloped space. 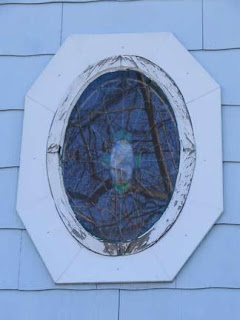 The old house has been empty for weeks, and I feared the worst when its last owners had two flea market sales during the summer.
The inevitable happened in December. The blue paint has been stripped, the wonderful old stained glass oval window has been covered in plywood, the bulldozers are at work on the front lawn, and soon, this relic of an era in Flushing when attractiveness and style was a factor in building design will be no more.

I'm told that the vultures developing New Flushing are offering some local homeowners no less than $1 million for their properties, and it's hard to resist that kind of largesse." - submitted by J.W.
Posted by Queens Crapper at 12:01 AM

Was the developer a campaign contributor to John Liu? Just checking.

I believe this tear-down is in John Liu's district! Wouldn't that make sense? There are a different set of "rules" that apply to this side of Northern Blvd. when it comes to development! Tommy Huang, by the way, was building on this side way back , I believe, in the late 1980s!

Boy, this Tommy Huang fellow is like the "energizer Bunny" that you see in all those TV commrcials! First he destroys the RKO Keith's, then he just keeps on ".....going... and going... and going....."! From the Klein Farm to Mazeau St. in Maspeth. I hope, for our country's sake, he doesn't continue, "......from sea to shining sea..."!

So what will it take to excise the cancer known as John Liu from his current position as City Councilman? I have read several times on this site that he is directly related to Tommy Huang and has received mega donations from other developers who are raping properties in his district and beyond as well. John Liu's racist leanings are destroying the community he represents. When is enough enough? I believe we should take back our city one city council representative at a time. Let's start off the New year right. Any suggestions?

I didn't read anywhere on this site, that Councilman John Liu has been proven to be directly related to Tommy Huang ( Liu & Huang are both very common Asian names like Smith & Jones). Only that we're all interested in seeking proof , if there is any truth to this rumor, from anybody who is out there that might have it. If anyone should find some proof, I would suggest contacting anyone who they think might be appropriate. I have no great love for either of these men but let's get the facts!

I don't give a "crap" about John Liu's familial relationships. It seems that he gives the green light to any Asian developer who wants to tear down viable one-family homes and replace them with ugly apartment buildings. He said he wanted children in his district to get a good education. The schools are already overflowing. By creating more housing without considering the infrastructure is suicidal and the town of Flushing is feeling the pinch now. Picture Flushing in 10 years. Where are all the other elected officials? Who represents the people???

Well,....... "don't give a crap about his familial relationships"............DOI, (The Dept. of Investigation) the FBI, ICE (Immigration & Customs Enforcement) the Board of Elections or whoever you like.... just might be! That's the real deal. I'm saying that you should beware of "libel" and get some proof to turn in . It's far more constructive! We did just that with some other issuses and got some damn good results that you are all enjoying now! As far as who represents us in Queens.....the developers......of course (through their paid representatives). Does that make it all clear for you? P.S............if you're a bogus "put-up" trying to "bait us or fish us out", forget about it! Over and out!