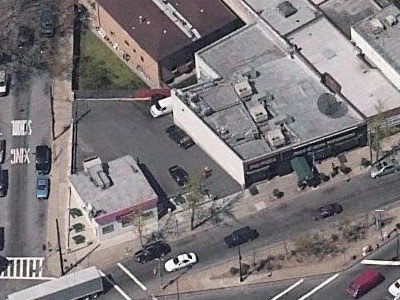 For decades, there was a Carvel store in Maspeth on Grand Avenue at 64th Street. Next door was an Italian Restaurant called Pat's. The same family owned both properties. The supposed plan is to put the food establishments back into the ground floor once completed. 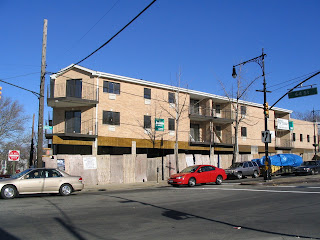 Community Board 5 strangely voted in the owner's favor; they voted 23-16 for the variance for this piece of Queens Crap. Rumor has it that members of the board were pressured by Councilman Dennis Gallagher into voting in favor of it. It was beaten back to as-of-right height at BSA by community leaders. Since then, there have been a litany of complaints about the site, where both workers and the public at large have been endangered.

Down zoning is a bit misleading. After the community board approves variance after variance it begins to look like Swiss cheese.

You want to be smart? It’s like controlling the Asian beetle. The best policy is just to keep the developers out completely.

Camp Upton, with its Army barracks looked a whole lot better than this fine example of "Gallagher -Variance- Crap"! When are we gonna have "tent-cities"! They're cheaper to build and have much more character!

Boy that Gallagher is really a pig, isn't he? Hopefully in 2009 he will enter permanent political retirement, unless of course, he can be forced into that condition earlier by being thrown in jail.

I wouldn't be surprised to see Gallagher actually become a developer or lobby on behalf of them. Hell, he's practically doing it already on the city payroll.

Its no secret that politicians, once out of office, become lobbyists. So, why doesn't someone from that Middle Village group suggest that Gallagher sponsor legislation banning lobbying activity for 10 years after leaving office.

Better than that! Let's also keep those "extended families" out of politics! (i.e. Stavisky) For instance: When contests for prizes are run, in the papers or on TV, any contestant who enters or anyone who participates cannot be currently employed or have been employed in the past by whoever is running that contest! The same should apply for politicians! That will put an end to "dynasties", which are "monarchistic" leftovers from the days of George 3rd before our glorious revolution that established the current Republic. It's UN-AMERICAN to keep all those politicos in the "family-business! This is just another form of the "Devine Right of Kings"!