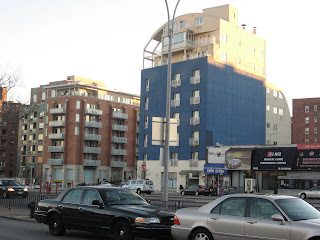 Dotting the southwest corner of 67th Drive and Queens Boulevard was once a 1920's Muller Brothers Moving and Storage building, which featured intricate brickwork and arched windows. In the early 2000's, it was completely revamped and converted into to a resin-based synthetic stucco bright blue prefabricated residential building with beige unproportional growths protruding from the top and back. It is known as the "Viscaya West" apartment building. 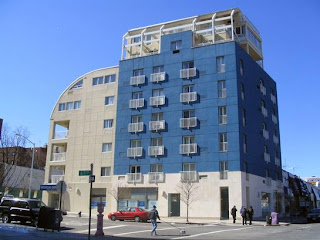 Blue was chosen to combat the soot from the heavily congested Queens Blvd, according to the developer. The building incorporates generic faux balconies which mask the exposed AC vents, compliments of the developer. See how the dramatic entryway leads up to the name. "Welcome home to your residential aviation barracks on Queens Boulevard!" 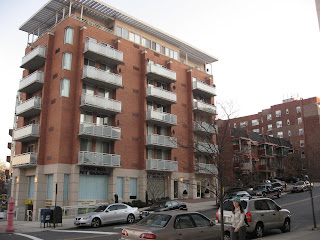 Directly across the street to the east, we come upon two additional buildings stuck together like glue; erected 2003-2004 and 2005-in progress, respectively. There has obviously been a shortage of windows, as well as typical stucco & penny-pinching terrace railings, amongst other degrading features. 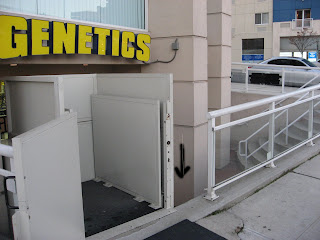 Take particular note of the Genetics training center store at 102-02 Queens Blvd, underneath the building. There's no longer a need to take the stairs on the right. If you're fit, just follow the arrow, and you'll find the quickest route down. Shall we attribute that to faulty engineering? What a violation! 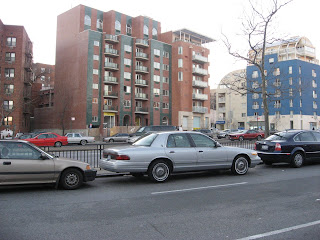 The building under construction makes one wonder if the architect was bleary-eyed on the drawing board. First take note of the grand archways that lead to nowhere and the unproportional facade. 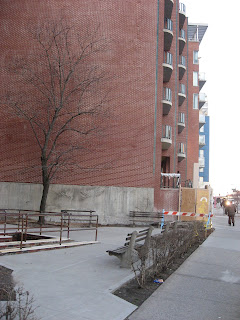 Then we come upon a small park which was once adjacent to a charming Art Deco diner, known as the Empress. Now the quarters are so tight, thanks to developers who build to the brink & exceed it, the site is gasping for air.

What ever happened to form, design, and community planning?

Submitted by M.P.
Posted by Queens Crapper at 12:00 AM

It seems like some builders don't start with blueprints these days. Almost like they're kids playing with legos.. "ok, I made the building out of white legos but there's no more of those, so I'll build an addition with blue legos and then use the rest of my leftover legos to build something funky on the roof"

This is really apalling.

This stuff looks worse than anything I could dream when I was a 10 year old playing with the various home building sets (tinkertoys, legos, and others more obscure today) back in the 50s.

I would show some of my hair brained ideas to adults that would indulgently smile and nod.

The accessories for those toys, rooted in the building styles of a far more elegant era, did not let one put this garbage together.

I remember when I would comment on this stuff to some friends I knew in Elmhurst who were immigrants.

They would shrug and say, "Its better than a basement. This is all they would show us."

The people who live here deserve respect in a home, not 'this is what you deseve and enjoy it becuase its the best you can get - besides your kind don't know any better.' (which is what I heard a real estate agent say to a close friend when he showed her a bathtub in a kitchen: she was a daughter of a powerful banking executive from Japan.)

This is not the way to treat Americans.

Nice to install an elevator for the disabled - while leaving a gap for children to fall through.

Isn't that blue building the one that Councilmember Melinda Katz likes. Maybe the developer will donate it to her as an "in kind"campaign contribution! She lives nearby and might want to trade up from her" little house" and move right in!

Style? There is none!

The blue building isn't that terrible, it breaks the monotony of its red-bricked neighbors. We need some post-modern buildings in Queens.

The third building that towers over the small park is repulsive, however.

Queens Boulevard did not get hideous overnight.

No, it took generations of hack appointees that knew next to nothing on good planning to create an ugly gash that goes on for mile after mile. Like a batch of little Horace Hardings, they were a passel of obscure appointees that were clueless when it came to good planning and architecture.

But the only thing that really mattered was they were well connected.

Mazeartist........you're speaking "tongue-in-cheek" about the "blue building"aren't you? Breaking up monotony with a "Frankenstein-put-together" doesn't count for much! Let's see some real architecture! This particular example looks like the make over of a former Soviet gun implacement, or a turret from the Battleship Potemkin!

The site used to be a car dealership.
I looked at these apartments through an agent. Don't let the look and new build deceive you. It is pure garbage inside. Shoddily slapped together and rushed to complete.
The buildings belong to none other than the Bahars who also own various "Fedders garbage" in the area.

Just as I though.

Thats what happens when a borough lets other people create their image. Ethinc steering, I believe, it was called in more frank times.