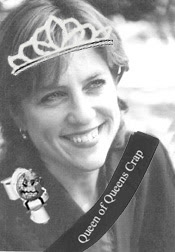 Melinda Katz, coronated Queen of all that is Queens Crap on the first of this year, is ending the first month of her reign with a bang. MTA employees are saying she decided that she wanted parking in front of her office for her employees, so she asked for a bus stop to be moved, to the chagrin of her senior constituents. This sounds very Queen-like:

"My four staff members?" Katz responded, adding that only two of her four full-time district office employees, plus one part-timer, drive to work.

Did she or didn't she? Who knows? But this is what happens when hearings are not held and agencies do whatever the hell they feel like doing without public input.
Posted by Queens Crapper at 7:13 AM

Humm. Sounds like a third world country to me. Anyone with juice can do anything and bend rules and government to satisfiy their imperial whim.

Add a drooling press to the mix, yup, Queens is certainly backward ... at least with its out of touch leadership.

What we need is Borat in Queens.

C'mon fellas. Melinda Katz needs all those extra parking spots for all those "canoodlers" that will be coming to her office now that Allan Hevesi (her previous main "canoodler) is gone. She is, after all, the builders' chief courtesan! And district office "quickies" with developers are part of the business!

That claim was unsubstantiated and told to the News reporter by a bus passenger. It's fine to speculate, but let's not confuse gossip with facts by latching on to whatever negative talk surfaces about a local official.

Where is the constructive criticism on this site?

The News' report says they confirmed that MTA employees were telling this to bus passengers.

As for constructive criticism, read the last paragraph. The problem is that once again, a decision was made that affected Queens taxpayers with neither their input nor awareness.

I don't care which one of you kids did this. Put it back.

Someone is going to lose their job.

Anyone care to speculate on the previous poster? My guess is it's Dean Wormer.

You want a substatiated claim, just log onto the NYC Campaign Finance Board's site and view the long list of all the developers who gave money to Melinda Katz's political campaigns! Very 'cozy" isn't it?

I still like how she pandered to the Manhattan crowd to get elected as city council president: don't worry, we will make sure that the buildings in your neighborhood fit with the surrounding fabric. WHY NOT THE SAME FOR QUEENS? DO YOU THINK WE ARE STUPID???