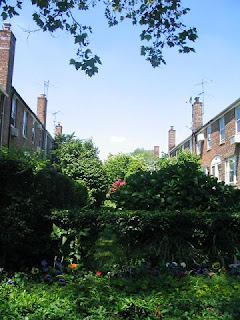 A Sunnyside Gardens nonprofit created in the 1980s as a mechanism to protect the neighborhood's common courtyards remains a mystery to community residents even as it holds a permanently restrictive deed to the back yards of nearly two dozen properties and owns a house in the district.

The foundation is also listed as delinquent by the state attorney general's office for not filing the past two years of federal income taxes with the state, the agency's Web site said.

The agreements arranged by the foundation were one of a number of efforts made after the original restrictive covenants on the garden homes, built in the mid-1920s, began expiring in the late 1960s. The sunset of those restrictions led to concerns as some owners began fencing in and developing their back yards at the expense of the neighborhood's signature gardens.

The foundation took ownership of a home in the gardens in 1988 at 41-13 47th St., city Department of Finance records show. It is currently a rental property, tax records indicated.

Some 600 properties in Sunnyside Gardens, including three large apartment properties and hundreds of smaller two-story homes circling interior gardens and courtyards, are being considered as a historic district by the city Landmarks Preservation Commission.

As a method of conservation, at least 23 property owners between 1986 and 1988 signed an agreement, knows as a deed of conservation easement, with the foundation, which regulated what they could do in perpetuity.

The contract required owners to pay an annual fee of at least $100 to the foundation.

The foundation is led by President Dorothy Morehead, who has directed the group since taking over from the former president and preservationist, Franklin Havlicek, who moved to Washington, D.C. and has since died.

Morehead did not respond to several requests for comment.

The not-for-profit was listed as delinquent by the state attorney general's office and has not filed the federal tax document since 2003, according to the agency's Web site.

Residents with the easement said they have not paid the annual filing fee in nearly a decade. Ira Greenberg, an attorney who lives in Sunnyside Gardens, said he is not aware of any current activities by the foundation.

"I have not been billed in at least eight years. As far as I know they are not active," he said.

Susan Meiklejohn, a professor of urban planning at Hunter College, whose property is regulated by one of the easements, said she hoped the building owned by the foundation could be put to better use than just as a residential rental property.

"I think it is a valuable community resource. My desire is that they sell the house and put it in the hands of a reputable community agency," she said.
Posted by Queens Crapper at 9:00 AM

Is Hunter College (indirectly & quietly) blockbusting the idea of Landmark status for Sunnyside Gardens via a loud-mouthed "know-it-all-employee" who flaunts "questionable studies" and happens to live there?

By the way, I've been told, the deed restrictions which protect the Sunnyside Gardens common courtyards from intrusive private use, have a 60 year expiration date. That's why Landmarking is the way to go?

CAUTION: Any clumsy attemps to thwart the process of designating Sunnyside Gardens as a historic district by attempting to slander or libel (by inflamitory statements or innuendo) the Sunnyside Foundation should not to be taken lightly! I happen to know some of the people invollved with that exemplary organization ! I caution all to tread carefully here! This is counterproductive !

Once again, a single person's agenda tumps a community's interest. Well, maybe not a single person. Perhaps they are acting in agent for others?!?! Hmmm.

Understand there are people digging into that one!

In the meantime, let's enjoy this one insight, again a courtesy of observing our fine media: important, historic buildings by the score are detroyed without comment in the press, but find one prodevelopment iniative and boy o boy they are there with helicopters.

Careful, you last "poster' (I think some people out there might recognize your style of writing, and possibly who you are). Don't walk on thin ice! You might be looking at the business end of a subpoena!

As a Hunter College student, I am appalled that Ms. Meiklejohn (I'm not sure if she is a real professor, Hunter has too many adjuncts)is fighting Landmarking status. As a former Queens resident who has seen many fine blocks destroyed by greedy developers, I'm really not sure what her real agenda is. I'm inclined to write her myself and ask. Other Hunter students: if you're reading this ask her yourselves too!

Perhaps you, as a Hunter College student, might be willing to post a profile of Ms. Meiklejohn i.e. her position at Hunter, classes she teaches (from the course catalogue) etc. You are closer to the source than we are. Thanks for the info you've already provided.

The silence of the gardens, keeping their head low at any whiff of public controversy, will boomerang in their faces if they don't watch out.

The last post seems to be from someone who has a personal "beef" against the Gardens, the Gardens Association (or maybe somebody who lives there). Very transparent, in my opinion!

No not at all, but someone who believes the folks in the Gardens are taking far too lightly the powers aligned against them.

This is true! Just as the sleeping people of Queens have ignored those "big- real- estate -guns" that were trained on them for years. I'm glad to report they're awake now , at their posts and loadedfor Bear!

Annonymus said...
This comment has been removed by the author.
Wednesday, August 19, 2009

Frank Havlicek was really at the start of reviving Sunnyside, and doing a lot for Queens in general, in the 1980s. Basically all of the trees, preservation of the gardens, planting boxes are still due to him and his work on the Foundation along with his wife and fellow Foundation members back then. We are still seeing the benefits of his work.

Agreed—what a crazy thing to reduce Frank Havlicek's work to a single line. He started the foundation—all of the trees, the street names, the communal gardens becoming communal again, protection of historical buildings in the 80s were due to him and his wife Louise and the other members of the Foundation that they put together. Sunnyside wouldn't be what it is today without them. Still thankful for their work all of these years later. Not sure why the Foundation's website today says nothing of this early work and the founders.