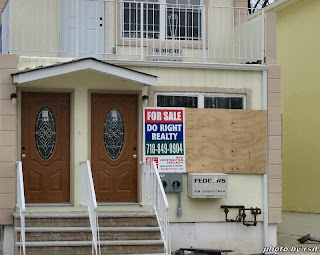 It's pretty ironic that a developer that seemed to do everything wrong is now selling the homes through a realty agent called "Do-Right Realty."

Notice the gas pipes in front that are extremely rusted.

After pressure from several local civic leaders and Senator Padavan, the developer has been forced to re-do the curbs in front to the version that was originally approved. Sorry, no more special curbs cuts for the monster SUVs.

This was one of the buildings featured in the original post called "Narrowminded," and a follow-up post called, "Revisiting 'The House Too Narrow.'" The permits for this house, and the one to its left, were both revoked by the DOB commissioner. So how is it that they are being sold?
Posted by Queens Crapper at 12:00 AM

"Do-Right"? Hah! They did wrong! Tear 'em down and improve the landscape!