They're Down on Bowne 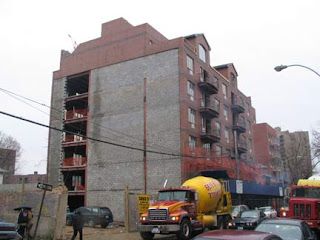 "I've been reading your articles with great anticipation and hope that you will someday see the blight being forced upon my little area of Flushing. As of now the situation is so out of control that the city ignores our complaints so does our compromised councilman, John Liu. The sidewalks are mucked and uneven, the elderly with push walkers cannot pass, the snow is never shoveled, the muck is never removed and no actions are taken to lessen the impact on the people living among this day in and day out for the last 5 years now. On any given morning these cement trucks are on the sidewalk and prevent mothers with carraiges from passing, they must use the street to navigate this mess. 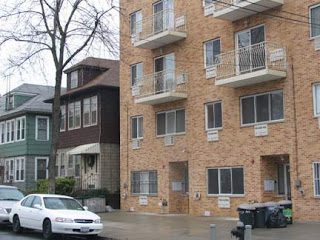 If you have the time please visit Cherry Avenue between Kissena Blvd and Bowne Street north to south, and Robinson Street, Union Street east to west; a little tight location that is under siege: demolished 75-year old homes, broken power lines, smashed sidewalks, muck and mud all around. 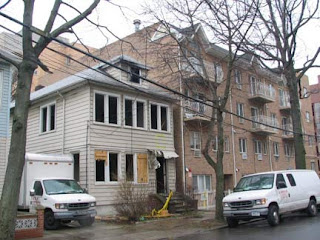 A nasty arson was committed on Cherry Avenue on XMas Eve; the house is gutted but no protective fencing anywhere, children play with the smashed glass and fire debris. I swear to the almighty its like West Germany post WW2. You will not think this is America let alone New York! What you cannot see is all the debris strewn about the driveway. When kids at the local PS 24 school 2 blocks away are discharged every day they pick up and throw the debris around and cause havoc. Why can't these owners be made to upkeep their property? 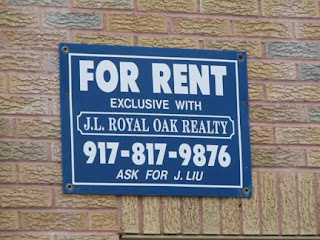 What is needed here is a city agency to evaluate this street... and not to include John Liu nor inform him of the inspection, so that he does not have time to warn his cohorts here. Also for the life of me I don't understand why Verizon, Time Warner and Con Edison have not sued these creeps for the devastation of the overhead lines and telephone poles?" 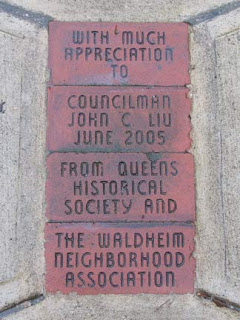 A couple of years ago, City Councilman John Liu and the Queens Historical Society unveiled the newly reconstructed Waldheim gateposts at Cherry Avenue and Bowne Street, with great fanfare.

"...when they were constructed in 1925, they marked the entrance to an upscale block and to the homes that lined both sides of Cherry from Bowne to Kissena Boulevard. According to a recent Queens Historical Society newsletter, a 1925 map lists this block as a private street."

'Posting' a Memory, on the Street 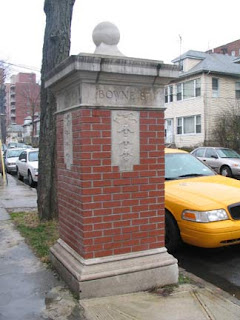 What a shame that Johnny Boy couldn't care less that Cherry Avenue is being reconstructed along the lines of New Flushing between Bowne and Kissena, and that the "upscale' homes are now considered nothing more than impediments to the dreams of developers.

It's also a shame that a city councilman pays more attention to the upkeep and repair of gateposts than he does to the esthetics of the city block that it opens to.
Posted by Queens Crapper at 12:00 AM

I'm very familiar with this area. A group tried to get the Waldheim neighborhood (directly accross Bowne St.) designated as a historic district by the LPC over 20 years ago! It was turned down, preparing the whole area to be over-developed years later! As far as John Liu is concerned, he seems to be only interested in being a spokesman for the Taiwanese/Chinese (not even Mainland Chinese) while excluding other Asian groups. There are many Asians who, I understand, are afraid to speak up regarding this matter for fear of reprisals (perhaps via that Stavisky crowd who have backed him for years)! Liu appears to have been chosen by certain interests (maybe in Washington D.C.) as the "fair haired boy" and seems to be "bullet-proof" like a particular "Teflon Don" that we might all remember! One can only hope that the Feds may be hot on Liu's trail, checking for any possible Taiwanese (???) political campaign money (???) flowing into the coffers of local (U.S.A.) candidates (???) from overseas. Don't expect a councilman like Liu to represent anyone but his own interests. Your neighborhood is just a stepping stone for Liu on his upward ascent. But to where or what post? The jury's not in on that one yet! He hasn't raised a million dollars for nothing! At this point it's, apparently, too late for the residents of this once fine neighborhood and only 2 choices that seem to remain: #1. Put up with the destruction and neglect. #2. Move out. This is a very sad situation!

Is that John Liu's name on the "For Sale" sign? How funny is that!

How fitting it is to see someone preserving the symbol, while allowing the place to be destroyed.

You can almost picture Charlton Heston standing by the those posts - the entrance to a neighborhood he once knew and loved- but now a skyline of cheap highrise crap and screaming "You Bastards!!!!"

Point of interest: CM John Liu is a recent addition to the Landmarks Subcommittee of City Council &, if I recall correctly, was even at the Oversight Hearing on potential Queens Historic Districts that was held last April in Queens Borough Hall. I'm fairly certain Waldheim was mentioned at that hearing (at the very least by me). Hmm, come to think of it; whatever happened to that list of districts that CM Melinda Katz said she was going to forward to LPC and follow up with?

Too bad that people like Brian Mc Laughlin and the Staviskys etc. were too busy branding Julia Harrison for her "so-called" anti-Asian, remarks that she was "supposed to" have made several years back. She fought for where she lived! Now Brian may be going from Albany to Attica! Maybe "Toby-the-troll & son Evan of a Stavisky" will get caught next!

Waldheim was, indeed, mentioned by you Simeon, but don't expect CM Liu to do an F-----g thing about Landmarking it! This area's been ear-marked for Asian builders! As for Melinda Katz, her "litter box" is already full! She's too busy giving "lip-service" to developers!

The Waldheim area has been red-lined for years and tear-downs are everywhere to be witnessed! Truly criminal! Arthur Douglas Nash who worked for Louis Comfort Tiffany (Tiffany Studios, Corona) lived in one of these fine homes. I believe it was on Ash Ave. near Parson's Blvd. It was among the first to be demolished !

Tiffany permitted A.D. Nash to be the only one granted the privilege of marking his own pieces of art glass that he created at the Tiffany Studios. They were signed "Nash"! I think he was the studio's chief gaffer (glass blower). Is there any info on this out there? What a loss!

I have lived on Bowne st. by Cherry ave. for over 16 yrs and I have never seen anything like this place,those new apartments on Cherry Ave. well if your not ASIAN!! YOUR NOT GETTING ONE:( and thats ok? But it's not ok for me to get pissed the hell off that these people refuse to speak ENGLISH,destroy my community, trespass onto my property to go through my trash and as soon as they don't get their way want to cry RACISM!!! Anther thing if your going to fly a FLAG IT DAMN WELL BETTER BE THE RED,WHITE and BLUE, LAST TIME I CHECKED I THOUGHT THIS WAS AMERICA!!