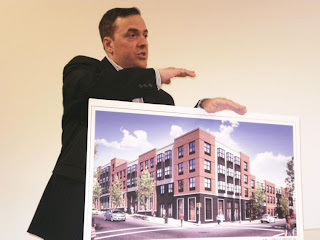 After much speculation, plans were announced at Monday’s meeting of Citizens for a Better Ridgewood to construct a residential building at 176 Woodward Ave.

Developers “propose to rezone the site,” according to Steve Sinacori, an attorney with Akerman Senterfitt, LLP.

Plans call for a 90,000-square-foot building which will reach four stories at its highest point and include retail space and an underground parking garage.

“This will be a vast improvement over what is there,” Sinacori promised.

What is currently there is a parcel of land owned for the past 24 years by businessman Frank Curtin, who rents space on the property to trucks for parking, and which, thanks to its nighttime desolation, Sinacori said, has been used for “illegal dumpings” and prostitution.

“The block is all residential on all four sides of the property. Historically, it has been a storage yard,” Sinacori said. “The neighbors are tired of the trucks and fumes.”

The site is, however, in an Industrial Business Zone, a designation the Bloomberg administration established “to foster industrial sector growth by creating real estate certainty.”

As one area civic leader pointed out after the meeting, City Planning Commissioner Amanda Burden had said when the IBZs were established that they represent an “ironclad commitment to maintain manufacturing zoning in key industrial areas and not permit residential use.”

Ariel Aufgang, an architect with Aufgang and Subotovsky, indicated at the meeting that the building will contain 88 units of housing. Rents will be around $1,000 for a studio and $1,200, $1,500 and $1,700 for one-, two-, and three-bedroom apartments, respectively, he said. Utilities and parking would be additional.

On the one hand, eradicating hookers and dumpers is good. On the other hand, the City said it would not rezone manufacturing properties in the Industrial Business Zones for residential. And 88 units is a lot of people in an area with little infrastructure.  Did the City make rules that it intended to be broken?
Posted by Queens Crapper at 12:33 AM

IBZs were created to entice insudtries out of places like Billyburg and into places like Queens and Staten Island. The EDC working to screw us, as usual, to advance their pet projects. These IBs are all located in the zoning mash-ups created in the 60s, which allowed heavy industry amidst residential... "surrounded by residential" sounds all too familiar. . . and then we find standards like buffer zones are skipped - yeah, broken promises all around. Promises, and regulations, are a minor problem when money's involved - just look at the BSA!

“The block is all residential on all four sides of the property...

Is this guy serious??? Check out the property on Bing or Google maps. The whole area is an industrial and residential mix with a cemetery and the Onderdonk house nearby.

a developer can simply put a hotel there and then quickly convert it to a shelter. having no infrastructure wont make a difference when you're warehousing people. Needing community resources wont be necessary.