As predicted, millstones get damaged at Queens Plaza 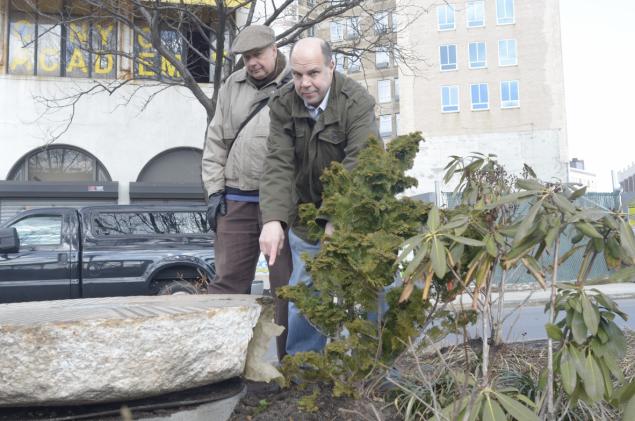 The western Queens hustle and bustle has taken a chunk out of a relic of old industrial New York City.

Local preservationists were alarmed when they recently noticed a centuries-old millstone — currently displayed in a small pedestrian greenspace near Queens Plaza — had been seriously damaged.

The circular stone is part of a pair in Dutch Kills that date back to as early as the mid-1600s. They were used in water-powered gristmills that converted grains into flour.

“They are not going to last much longer while exposed to the elements,” Bob Singleton, executive director of the Greater Astoria Historical Society, told the Daily News on Wednesday.

A group of concerned stakeholders keep a “continuous watch” on the millstones, and quickly noticed the damage to one of them, Singleton said. The millstone had a previous crack in that spot.

His organization is reigniting its years-long push to have them relocated to somewhere indoors, Singleton said.

“You don’t need the precious artifacts to be exposed to uncertainties of urban life,” he said.

The proper location for the two millstones was debated in 2010 while the pedestrian plaza was being erected by the city Economic Development Corp. The two circular relics were excavated from their encasing in a city sidewalk.

“Parks retrieved the section of the millstone that came off and we’re storing it until we can make repairs,” agency spokeswoman Tara Kiernan said in a statement. “There were no signs of vandalism and we suspect the piece might have been part of a former repair. We do not have any plans to move the millstones indoors.”

Further proof that this city is run by a bunch of idiots.
Posted by Queens Crapper at 12:57 AM

Relocate them to Greenwood Cemetery where they can properly be taken care of.

Did we need further proof? The fact that they're there wasn't enough?

The lack of regard, for historic preservation by our elected officials in our borough, is criminal!

Between Queens' crooked or stupid borough presidents, and the rest of the Bloomberg administration jerk wad simpletons--England's "Stonehenge", left in their "tender" care, would have been destroyed by pollution, traffic and vandalism.

Not to worry though, "Krazy Glue" and duct tape can repair all damages to these historic millstones.

The damages wrought by government idiots, however, remains long standing.

I'm counting the days until our aloof nasty-nanny mayor finally leaves city hall--unless someone out there wishes to tar and feather the 5' 7" tall SOB, and send him off to Boston!

Until then Mayor Doomberg will be a millstone around our necks.

And there will be no end to that dimwit "burro" president Helen Marshall's inadequacy, until she's put out to feed!

Uh--BTW--I wonder,
what does Pete "junior" Vallone have to say about the damage to these mill stones?

Double take - Initially it appears that the guy in the picture is pointing at a "squirrel" the illusion is where the millstone is damaged - the damaged part appears as a squirrel! Yeah I know............

It's mayoral Agencies - in this case the EDC - that screw us over. they are answerable to no one.

I'm sure Jimmy Vam Bramer will demand action. I'm also sure I saw a pig fly this morning.

If they want to keep the millstones at Queens Plaza, they can place them in the lobby of the brand new building that is currently occupied by DOH. Newtown Historical Society suggested that years ago and it was rejected. Now it is obvious that they need to be placed indoors for protection.

Same shit with several restored New York State pavilion map panels students slaved 3 months in the Queens museum to restore.
After bragging "what a good job and some photo ops" Helen Marshalls mob had them tossed outside unsupported on sloppy 2X4s referred to as "packing crates" .
They all got cracked and smashed.
That sick wretch doesn't want anything "old" or "historic" around.

Welcome to the new Queens. The millstones will be gone and destroyed by years end, much like the rest of Queens history. All that matters today is the VIBRANT! DIVERSE! fantasyland that our corrupt politicians have created with third world invaders, foreign developers, totally clueless hipsters and arrogant, vain and greedy yuppies.

If they were found on 14th street in Manhattan and not in Queens, they would have had a $300M museum built around them.

As was once said,
"Where somebody spits in Manhattan, they landmark that site".

In Queens we can't seem to get shit.