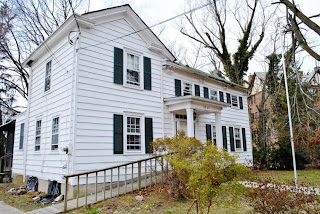 The suggested landmarking of the remainder of Douglaston, five years after it was originally put on the city’s agenda, has re-emerged as a house on the border of the proposed historic district has been slated for alterations.

State Sen. Tony Avella (D-Bayside) was joined in a press conference on Friday by members of various civic associations demanding the Department of Buildings and Landmarks Preservation Commission prevent the home at 38-60 Douglaston Parkway from being transformed into something completely anathema with the calendared historic district that covers the area. Avella fought for the designation of the Douglaston Historic District Extension during his councilmanic tenure.

It was initially calendared in 2008 and has been sitting at the LPC ever since.

The owner, Xu Jun Zhai, has applied and been approved by the DOB to expand the home both vertically and horizontally, including an alteration in the number of stories, according to filings available on the agency’s website.

Paul Graziano, an urban planning consultant, and candidate for the 19th Council District hoping to unseat incumbent Dan Halloran (R-Whitestone) in November, helped map out the historic district.
“This house was already moved 150 feet years ago, so that it would not be demolished,” Graziano said. “And now it is under threat of being changed.”

Should the LPC go ahead with landmarking either the single home or entire district, the area’s City Council member would have final say in the decision through home rule, which allows the presiding legislator the leeway to guide the council’s decisions on a particular district.

The proposed work puts Halloran in an ideological bind.

“Here’s my dilemma: I’m a big property rights person,” Halloran said in an interview, later adding, “There’s something to be said of homes that were colonial style or Tudor style and the maintenance of the theme of the neighborhood.

“The last thing I want to do is put ourselves in a box to have something going up that’s completely out of context.”

The proposed historic district runs contrary to the wishes of some of the homeowners within its bounds, and has been opposed by vocal members of the community. Halloran said he wants to abide by the wishes of the majority of homeowners, within reason.

To that end, he’s calling for a meeting of minds with all parties involved: the LPC, preservationists and those opposed to the historic district.
“Maybe we can build a consensus,” he said.

The consensus was already built and that's why the LPC wants to move ahead with designating the historic district. The one holding it up now is YOU, Dan.
Posted by Queens Crapper at 12:22 AM

wow... a recent immigrant who has newfound riches wants to make a giant hideous box shaped house... how unusual


The NYC Landmarks Law has been upheld numerous times in the U.S. Supreme Court, numbnutz.

Landmarking is not considered a taking or seizure of property...only by property-rights fanatics, who in the same breath constantly complain about how their neighborhood is going to shit.

Getting an historic district stopped Douglas Manor and Douglaston Hill from becoming another Malba-type neighborhood filled with McMansions, which they didn't want it to become.

They just want the rest of their neighborhood to be protected from bad development. WTF is so wrong with that??

Should the LPC go ahead with landmarking either the single home or entire district, the area’s City Council member would have final say in the decision through home rule, which allows the presiding legislator the leeway to guide the council’s decisions on a particular district.
------------------
For this reason alone the law should be abolished. Everyone should have equal rights and protection under law.

They'll be taking their lumps just like Flushing.
It's in the cards.

As long as Dan Halloran and his Libertarian tea party jerks are running things, you'll continue to get the royal screw.

A message from Megan said...

Speaking of screw jobs.
have you porked any of your staff lately Councilman Halloran?

SCOTUS decisions are based on the majority liberal or conservative judges ....at the time . the decisions do not always agree with the majority of U.S.citizens. eg. "OBAMACARE"

This one has been on the books since 1964. It was never changed despite all the years of conservative judge majority. It's over.

Ever notice how weird the Queens Crap postings are from their corner of our fair borough?

And who says that the majority of people oppose landmark laws, anyway?

The Bill of Rights refers to the first 10 Amendments only. And it's "serfs."