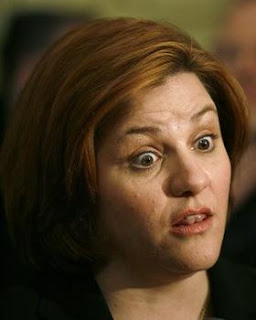 As she pursues a high-profile bid for mayor, Ms. Quinn, a Democrat, has proudly promoted her boisterous personality, hoping that voters will embrace her blend of brashness and personal charm.

But in private, friends and colleagues say, another Ms. Quinn can emerge: controlling, temperamental and surprisingly volatile, with a habit of hair-trigger eruptions of unchecked, face-to-face wrath.

She has threatened, repeatedly, to slice off the private parts of those who cross her.

She is sensitive to slights: When a Queens councilwoman neglected to credit Ms. Quinn in a news release, the speaker retaliated by cutting money for programs in her district.

Ms. Quinn’s staff, concerned that angry tirades could be overheard by outsiders, added soundproofing to her City Hall office. Wary of her temper, they are known to ask one another: “Did she throw up on you today?”

More than two dozen current and former city officials, lobbyists and political operatives recounted being berated by Ms. Quinn, but few would speak for the record, citing a fear of retaliation. They offered nearly identical accounts of their altercations, describing a rapid escalation of voice and vitriol, occasionally laced with vulgarity.

“Her eyes get really wide, she points her fingers,” one official said. “She gets really close to you. It’s really in your face.”

A former campaign donor who had been called to Ms. Quinn’s office to discuss a legislative proposal said: “She screamed at me for 10 minutes, uninterrupted, and used the ‘F’-word at least 20 times. I was just so startled, I didn’t know what to do.”

On telephone calls, Ms. Quinn can begin unexpected diatribes, her voice growing so loud that callers often have to hold their phones away from their ears.

You can hear Christine Quinn rant on an answering machine here.

UPDATE:  Original recording here.
Posted by Queens Crapper at 10:40 AM

As Bloomberg's understudy, she too will have to buy her way into office. Only the most shallow will otherwise vote for her on her own merits.

Because of her ill temperament and shrill nature, she is grossly unqualified for the office of mayor. Unfortunately her opponents are more extreme than she is. Buckle up people, we face a bumpy ride in the next four years.

This is the absolute 100% truth. She is truly a very nasty individual. I witnessed/heard "the Wrath of Quinn" over the phone one day. She was ripping into an NYC baseball team (which shall remain unamed) VP over the phone. She curses like a "drunken sailor". Sincerely hope "this piece of work" does not make it to NYC Mayor.

It's generally noted that people with these rage outbursts are stupider than others, and flip out because they are simply too dumb to resolve issues in a rational manner.

It's also noteworthy how she took a shit on Crowley, and more importantly, the citizens of her district.

Do we really want a vindictive bitch running this city?

Christine Quinn is an absolute disgrace as an elected official and even worse as a human being.

ABQ - anyone but Quinn

Lhota is even worse!

I'm in no way a Christine Quinn supporter, a fan or anything for that matter.

However, I clicked on the link in this post and listened to the entire supposed rant on the answering machine and I didn't find it to be anything all that severe. Yes, she's annoyed. But that's it. Yes, she sounds defensive and accuses "John" of being a sexist. Yes, I found her tone to be condescending. So what.

There was no screaming, no swearing, nothing that sounded unhinged or out of control and I didn't find it to be "shrill" (love the use of that Fox News code word, by the way).

If you're trying to make a case for Christine Quinn being an unsuitable candidate for mayor based on that message left on that answering machine (apparently over ten years ago), you failed.

Maybe she IS a whacked out volcano that explodes all the time just as this post claims but you've got to do better than this recording and a bunch of hearsay.

I'm sure there's plenty more out there that will be more to your liking. Be patient.

Anyone who calls another person a bigot or a sexist just because they are not supported is an bad person and a horrible “leader”. This is what she did and it's a moral disgrace.

Clearly she had this threatening tone as if "I will call you a sexist in public and destroy your reputation" in my view. This is not valid and is filthy.

maybe she is henpecked ,now that she has wife ? marriage can be stressful.....

"There was no screaming, no swearing, nothing that sounded unhinged or out of control and I didn't find it to be "shrill" (love the use of that Fox News code word, by the way).

If you're trying to make a case for Christine Quinn being an unsuitable candidate for mayor based on that message left on that answering machine (apparently over ten years ago), you failed."

Why don't you click on the link and read the entire NYTIMES article that QueensCrapper appreciably posted? Even her friends and closest aides are saying the same thing -- that she is a verbally abusive, vindictive and spiteful individual who punishes people because of perceived slights and petty quarrels. Case in point - the vacuous and mentally-challenged councilwoman from Maspeth & Glendale forgot to give Quinn credit on a particular issue, so Quinn retaliated by cutting funding for senior centers in her district. AND, she bragged about it!

Don't base your opinion solely on a recording. One more thing, Fox News does not hold a monopoly on the word "shrill." I'll use it if it aptly describes a person's personality trait.

The original answering tape is at http://www.youtube.com/watch?feature=player_embedded&v=EpvoM2eQED8

Queens Crap has the incorrect URL. The story is at http://christinequinn.com/content/christine-quinn-has-anger-management-issues

Her political career is over when she killed off St. Vincent's hospital.

Quinn is more of a dictator than Bloomberg, she will be vandictive,bullying and a tyrant with her temper if elected...NYC you have been warned...

Isn't she doing what Sheryl Sandberg says women should do?

Quinn is a raging dyke!
How could she hide her hissy fits?
Soundproofing her office (or oriface) won't help.

This is very unsettling.a low-class slob. It's clear she will use the city budget to reward or punish. That is reason enough not to vote for her. Let's hope that if Quimm is elected, she gets a city council chair who is not a lapdog like she has been and will understand that the council is a branch of govt whose proper role is one of checks and balances to the mayor.


Quinn rejected NYC Voters' decision to allow only Two Terms for Mayor and the City Council. That's one good reason to reject HER.

who does she think she is to tell people she would cut off their privates? I cannot stand her and her nasty mouth needs to go... we had to put up with bloombturd too long and we don't need her in next... time for something fresh for NEW YORK..

nyc DEMS/PROGRESSIVES in the council have no idea what "CHECKS AND BALANCES" even means to a government.

they have never experienced a opposition party with more than 3-4 members.they only know DEM/LIB/PROG. DICTATORSHIP. and public union/political tax laundering bribery.

As a woman, I am not voting for someone just because she happens to be a woman.

She is a female version of vindictive crazy bully Rudy Giuliani.

In the primary - ANYBODY BUT QUINN.