Why did CB3 try to meet in secret about the USTA project? 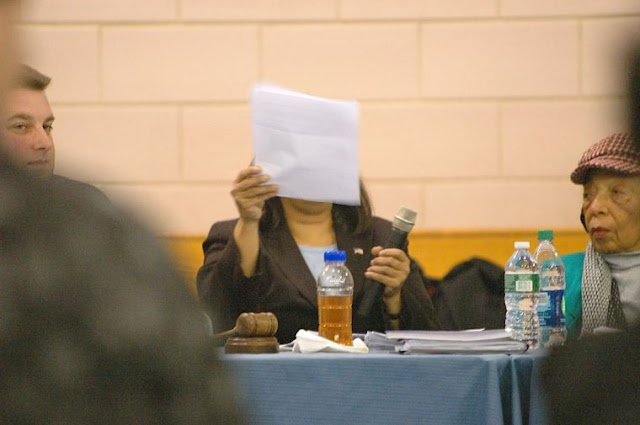 But there was a second show going on. In the idealistic world of open meetings, laws and light being shone on public documents, CB 3 has been the oddball.

The all-volunteer board has a history of thwarting press attempts for access to documents, and even for taking photos at meetings.

During its vote on the United States Tennis Association’s expansion within the park, Chairwoman Marta Lebreton took to hiding behind a sheet of paper when a camera lens faced her direction.

Fair game. But Lebreton also rebuffed a Chronicle editor who asked to obtain a copy of the motion voted on that evening by the board.

The state Open Meetings Law says all documents discussed at open meetings must be available, though a board can charge a “reasonable” fee for copies.

The board’s attempts to limit public access allegedly go beyond holding back records. Two parks advocates have filed a complaint against the board for allegedly acting unlawfully.

A letter from Robert LoScalzo and Alfredo Centola, addressed to Queens Community Board Director Barry Grodenchik, claims the board did not properly alert the public or press about a committee meeting on the USTA proposal held March 5.

A review of the board’s website shows no record of the meeting.

Geoffrey Croft, the president of NYC Park Advocates, plans to file a complaint later this week.

“If they have a website and it’s easy to post, and they do not, then that would be failure to comply with the law,” said Robert Freeman, executive director of the New York State Committee on Open Government.

The letter goes on to say that a CB 3 staff member told LoScalzo and Centola, “There is not a meeting.” When they followed up, a staff member said “[I’m] not allowed to say anything.”

The Open Meetings Law’s provisions on meeting notification are threefold — community boards must give notice of meetings to media outlets, designated public locations and, if possible, put them online.

Additionally, the complaint alleges the board did not give documents to the public and attempted to prevent photography.

LoScalzo and Centola ask in their letter that Lebreton be removed from the board and District Manager Giovanna Reid be formally disciplined.

“We got a seven-page letter alleging certain things. We are doing what we should be doing. We reached out to our legal person. These are allegations,” Andrews said.

The borough president’s board has authority over Lebreton, but not Reid, who is an employee of CB 3. 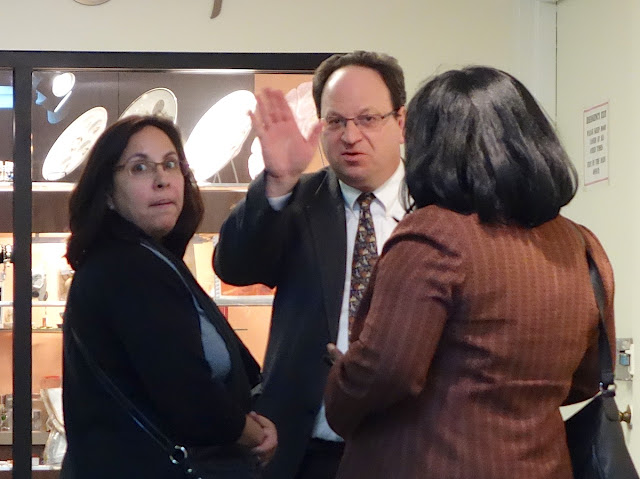 This is a photo of Barry Grodenchik talking over the situation with Giovanna Reid and Marta Lebreton, who couldn't hide from the camera this time. Barry, you better do something about this. You're currently in charge of community boards and running for borough president, after all, and you don't want potential voters to think you support dishonest practices. We're certainly going to be staying on top of this one.

Remember, folks, the government has the responsibility to let the sunshine in, but since they can't be trusted, it falls on us to make sure they do. Did the CB's marching orders come from Julissa or Barry? We'll get to the bottom of it. Everybody sing!

There goes Al again doin what's right and calling them out. I say fuck writing him for city council. Lets write him in for Boro President. I her he's a republican. This guy Loscalzo is a one man genius machine. I've seen him in action with the whole Willets point battle. If Al makes him deputy BP that would be a grand slam for Queens.

CB3 Chairperson Marta Lebreton gave FALSE information -- "There is not a meeting" -- to a member of the public who called to ask when and where the meeting was being held. Moreover, CB3 staff said they were "not allowed to say" anything in response to an enquiry about the meeting. All of that is after CB3 did not provide the required public notice of the meeting, and refused to provide any information about the meeting to other callers. All of that can only be one thing -- an attempt by CB3 to hold a secret meeting, which is unlawful.

The following week at the public hearing on the same matter, CB3 refused to make available to the public the document embodying the CB3 committee's recommendations about the matter -- a document that must be accessible to the public, per the NYS Open Meetings Law. Beyond that, the Chronicle reports that its editor was also denied access to the document; and that on prior past occasions CB3 has attempted to bar press from recording meetings (also contrary to law).

This purports to be a "community" board??? This sounds like Soviet politburo. CB3 needs to wake up and begin fulfilling its obligations as a community board, not a private fiefdom of Lebreton & Reid. Shame on them.

It looks like some members (and chair?) were paid off by the USTA. Only crooks or cowards meet behind closed doors!

Could there be any other explanation for their shady behavior?

They are pure window dressing.
Toy government full of tin demagogues is what we get for our tax money!

Who do most of them serve--the people or the developers?

We know that a few CB#7 members serve themselves.
Who are these self servers?

I think that most of you already know.

Paid off really, then why did CB3 vote against the USTA plan by a vote of 33-2? I don't think so. This total crap of an article is an abuse of the First Amendment, as a means to threaten the Borough President, which is beyond ethical.

What part of this article was a threat against the borough president? You don't like the first amendment or the sunshine laws, move to China.

Look its wonderful everyone is upset about this but unless we make an effort for the entire borough get together and compare notes, and put in place an INDEPENDENT PERMANENT MONITORING SYSTEM for the entire political structure, this exercise simply remains an interesting side show for the rest of us.

Because today its Flushing Meadows, tomorrow its the muck of SE Queens politics, and the next its the wholesale displacement of western Queens communities for development.

Unless this gives us a wake-up call to do something like wholesale house cleaning nothing will change.

Nice video selection. Marilyn McCoo, back in the day, always a winner.

it appears that Queens County taxpayers are in need of a "GUCCIFER "HACKER, who is threatening E-mail expose of the Benghazi/Obama/H.R.C. alleged cover up.

crap of an article? threatening the borough president?

you're nothing but a moron. one who's lucky to have the protections guaranteed by the Constitution even though you don't deserve them.

What do you prefer the papers run, jerk off photos of the Establishment handing each other certificates?

I agree...
ABOLISH ALL COMMUNITY BOARDS!
ABOLISH THE OFFICE OF BOROUGH PRESIDENT!

They both serve to grease through rampant over development...while destroying the integrity of neighborhoods.

They ARE NOT serving us constituent taxpayers.
That's for sure!

Somebody posting here is really pissed off that Queens Crap has so many readers. They obviously fear its ever increasing power to tell the real truth...
not the kind of lies printed in the Queens Tribune by its whore ad masters...Nussbaum and Schenckler!

Maybe we Queensites have finally gained an advantage over the crooks that have been running our borough into the ground.

The truth is out there...and it SHALL prevail.