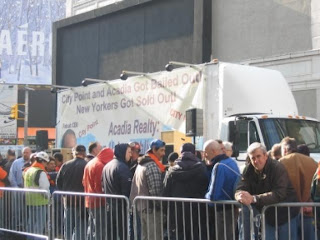 Unions and community groups are calling on the Bloomberg Administration to halt construction work at the City Point mega-project.

The city should stop the massive downtown Brooklyn development at DeKalb and Flatbush Aves. while it does a new study of the impact of low wages developers are paying, the groups said.

“We know that construction workers are being paid poverty wages at City Point and they are not getting any benefits,” said Terry Moore of Metallic Ironworkers Local 46.

Workers are being paid $15 per hour at the 1.6 million-square-foot residential and commercial development, the advocates charged — which adds up to $22,500 per year, below the city’s poverty level for a family of four.

“Brooklyn’s middle class is under attack and this project is a major portion of the assault,” the groups’ lawyer Thomas Kennedy wrote in a March 4 letter to Deputy Mayor Robert Steel.

Bloomberg Adminstration spokeswoman Julie Wood called City Point “a linchpin for revitalization in downtown Brooklyn” but did not address charges of poverty-level wages.

You may recall this was another eminent domain deal that was supposed to provide great jobs, parkland, etc.  It's funny how the outcome is NEVER what's promised?  When will we stop believing the hype?
Posted by Queens Crapper at 12:06 AM

I'm with you on this one, Crappy, but someone's math isn't adding up. $15 per hour, for a 40 hour week, is $31,200 a year, not the $22,500 the article cites. Also, the piece just blithely says their (incorrect) total puts the average worker below poverty for a family of four, but how many of these workers have a wife and two kids? It's hard to believe that's the situation for all the men working there.

Downtown Brooklyn is starting to look like Gotham city from the first Batman movie...............

Wait a minute. While there's no shortage of exploitative construction companies, and we don't know the facts, who's complaining? The construction unions. If there is one group who can be counted on to misrepresent the truth, it's them. Again, we don't know the facts - other than the work is being done non-union. And the unions reflexively want to hound non-union companies and employees out of their jobs. Truth be damned.

Is that happening here? We don't know, but it's the same plot of a movie I've seen a hundred times.