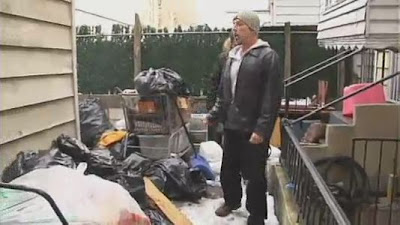 NY1 has told you about the garbage problem in and around around 107th Avenue, but Joe Moretti said if you head north to 89th Avenue, the streets are filthy there, too.

"Look at this," Moretti said, showing NY1 one building in the area. "This is totally disgusting. You're tripping over garbage."

Moretti said he has written numerous emails to city and local officials about several trash problems in the neighborhood, and posted pictures of them online, but the mess keeps piling up.

"This is a major violation right here," he said. "Now, will they get ticketed for this? I don't know."

But while he was fuming about the garbage, another man said we should take a look next door, where someone was dumping in the backyard.

The tenants said they didn't know where the trash came from and the landlord doesn't live here, which is very common in the area.

The man who owns the house next door said the trash has attracted rodents.

"The rats go in on my property," he said.

After seeing this mess, Moretti sent what he called a nasty email to local leaders and the Department of Sanitation. Some have characterized his emails as out of line because he often uses profanity.

"If after viewing Part 1 and now Part 2 below (with 2 more in the series to go this week), it is very obvious how bad this garbage problem in our community is and how very little our politicians and the city are doing to address, combat and solve this problem. And for those who do not like the language I use such as low class ghetto people or low class third world immigrants, who are the major culprits of this issue, TOO DAMN BAD. Instead of getting your panties in a bunch over my language, you need to remove your bunched panties out of your ass and start getting extremely irate about this garbage issue that has been going on for way too long in this community (I have only been here a little over 2 years, so what the hell have many of you been doing the last 20 years). It is obvious this problem has existed for decades and even more obviously not much has been done to address it or fix it, although our walking dead local politicians will try to tell you otherwise (the only time you hear from them on this issue is when the media does a story and then they come out of the woodwork to say something because they have been confronted). Many in our community contribute to the problem, many walk around with blinders on, many do not give a shit and our our leaders and politicians have done very little if anything to address this issue, including the Queen Bee herself, Queens Borough President Helen Marshall.

So when you get all pissed off about "low class ghetto people" or low class third world immigrant" or "lazy ass do nothing but collect a paycheck local politicians", WAKE UP AND SMELL THE GARBAGE and watch the video. It certainly is not upstanding or educated people or those who care about the community who are tossing their babies shitty diapers out of their car into the sidewalk or dumping a shitload of tires into an empty lot or tearing down a nice house and leaving a dirty empty lot for years or throwing mattresses on the sidewalk.

And where the hell are all the ministers and pastors of the many churches in our community. Why are you not speaking out against this major issue that is affecting the quality of life in our community. Just yesterday I read an article about the influential pastor, Floyd Flake of Allen A.M.E. Cathedral, endorsing Melinda Katz for Queens Borough President. What about it Pastor Flake, how about throwing your weight behind this issue.

Oh and while you are all at it, there have been mattresses lying on the sidewalk on 172nd street right below Hillside Avenue, around the corner of the Guyana Palm Court Restaurant, in front of some Tutoring place and right near Kathy's Day Care Center (which I would not let watch a gold fish). They have been lying there for 5 days and I have been waiting to see how long they will be there before anyone says anything or they get removed. Maybe the restaurant, the tutoring place (since it is in front of their door) or the day care center. Again speaks volumes about some of the people of the community and some of these wonderful establishments that litter our neighborhood. LOW CLASS INDEED!!!!!!"

Joe Moretti
Posted by Queens Crapper at 12:49 AM

I don't understand. I own a business in Glendale and if I have 11 cigarettes butts, an empty bottle and 3 snack wrappers on the sidewalk in front of my store, I end up with a $100 ticket. What goes on here?

Where's the Community Board, Assemblyperson,
Congressman, City Council?
Let's add Board of Health and Sanitation inspectors to the mix too.

You can't afford a Tackling Dummy that you need to use trash?

There's an old saying that whenever someone uses cuss words that person is telling the truth. It comes from his spleen.

Jamaica began going steadily downhill since the late 1950s. I know because I moved out to the northeast in 1966.

Your moving date has long passed.

When a nabe gets written off by NYC pols, it turns into a garbage strewn 3rd world crime ridden territory.

You don't see trash gathering on the streets of Bayside.