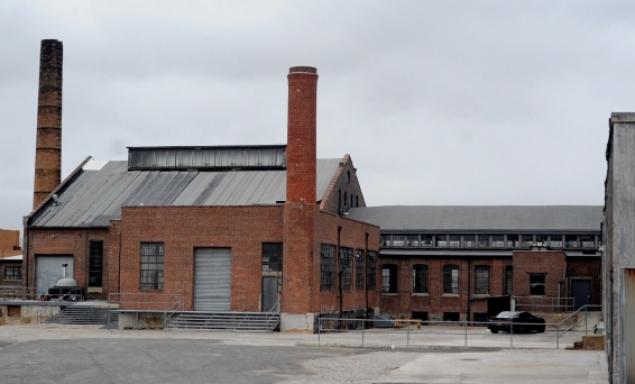 A former glass factory in a gritty section of Queens is being transformed into a sprawling arts venue — though community members have been largely unaware of the sweeping changes in store.

The Knockdown Center, located at 52-19 Flushing Ave. in Maspeth, has already hosted eclectic events from mini-golf to art installations.

But it still needs approval from the local community board before operating as an arts venue, said Jean Tanler, Queens coordinator for the Maspeth Industrial Business Zone.

“They’re not supposed to be operating as an arts center as far as I’m aware,” Tanler said.

Because it is located in the industrial business zone, it must get a variance from the city Board of Standards and Appeals and go through the community board, Tanler said.

Local leaders have been seeking alternatives to replace the exodus of manufacturing that was once a staple of the area, but they were puzzled by the lack of communication by Knockdown.

Kate Watson, a spokeswoman for the center, did not respond to several requests for comment.

The most recent listed owner of 2.5-acre property is Paul Sklar of Lynbrook, N.Y., according to city Buildings Department records. Sklar could not be reached for comment Wednesday.

The venue recently hosted a projector video project featuring 20 artists and a poetry reading as well as several art shows.

Community Board 5 Chairman Vincent Arcuri said the board had no knowledge that the factory was being used as performance space.

“We don’t know if it’s legally occupied,” Arcuri said. “We have not heard anything about it.”

Jeff Mulligan, executive director of the Board of Standards and Appeals, said there was no record of a variance request to operate as an arts venue.

I give props to the Daily News for looking into the legality of this setup. Other news websites have mentioned this place as an "hip" art space, but failed to mention that it's being repurposed illegally. So again, we have a property in the IBZ being used for non-IBZ purposes. What is the point of having special zoning if variances and non-enforcement end up making it look like swiss cheese?
Posted by Queens Crapper at 12:30 AM

IBZs have nothing to do with what you, or I, or the community wants. They exist solely for the insdustrial business and property owners.

And it would be interesting to know if there's been any net growth in businesses since the IBZ was set up....

And you can't blame artists for looking for the cheapest and most subsidized venue they can find. They may be artists, but they are not stupid about money.

I feel like if the event is legal, and they pay for it, why not? However I understand Crappy's reticence given that once you open the floodgates for non-IBZ usage, you start getting lofts, hitchhiker hotels, squatters, etc.
In any case, it's really a statement on where industry in the nation is: the toilet.

non-enforcement end up making it look like a joke. No issues with the arts aspect of who is using the venue, but it needs to be done in good faith, legally!

Many of these abound in Queens...particularly within the Flushing area.

A large Korean Church illegally operates within the confines of the College Point Corporate Park, and this issue has been ignored by CB#7 for years.

This violates the guide lines and purpose of the corporate park.

Will anyone say "boo" about it?

We never wish to "offend" any Asians, even when they're violating the law.
Maybe it's because they drop big bucks into many a pol's campaign coffers.

Asians ? NYC's Chinatown was always gerrymandered, so what are you talking about? How come you're not complaining most of the FDNY is still white and male?

Thank you Asian troll.
But Floo-shing is the hub of Asian corruption due to its back water out of sight location.

And the FDNY's brass is mostly Irish.
Eh, Eugene Kelty?