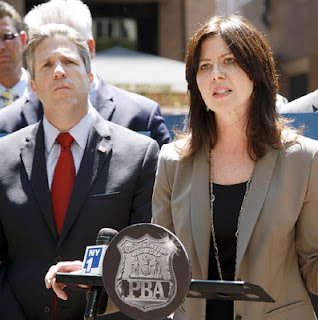 More than 30 members of the City Council have co-sponsored the Community Safety Act, a set of bills designed to curb stop-and-frisks and alter NYPD policies. While it is indeed important to discuss ways of improving the NYPD, these bills neglect to examine a simple solution that will improve policing and keep us protected: Hire more cops.

...a larger force would make us safer — and greatly reduce the tensions that stops give rise to.

Community policing put officers in position to prevent crime and gave comfort to residents. The growth of the force that began under Dinkins put the NYPD’s ranks at nearly 41,000 under Guiliani — and brought a dramatic decrease in crime.

But since then Mayor Bloomberg has slashed more than 6,000 cops, including a 30 percent drop in detectives. We’re asking the NYPD to do more with less each year, even as it faces new responsibilities for counterterrorism and technology crime.

Mayor Bloomberg slashed 6,000 cops? I think Ms. Crowley has forgotten which branch of government is responsible for passing the budget every year. Just because the Mayor hands you a shit sandwich doesn't mean you have to eat it. But for the first time in NYC history, this Council, under the leadership of Christine Quinn, seems to think it does.

And if we're still debating whether or not stop-and-frisk works, then it probably doesn't. Not to mention that it's unconstitutional.

Also keep in mind that this Op-Ed was probably ghostwritten by Pat "Support it as a tool" Lynch, a "very close friend" of Liz Crowley.
Posted by Queens Crapper at 12:11 AM

Her lips look permanently parted, from all of the years of lip service she's given, to secure her political positions.

Speaking of positions, the Kama Sutra has nothing on "dizzy" Lizzy's creativity when it comes to doing developers for personal gain.

Wasn't she one of Brian Mc Laughlin's bimbos?

That's how these kind of jerk-wads get elected.
You have only yourselves to blame, you "A" holes!

How long until the idiot Crowley is term-limited?

How close a friend.