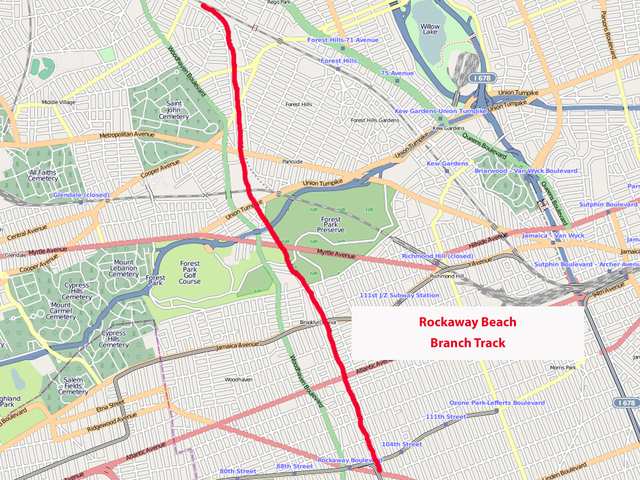 Two Queens congressmen said they are backing a plan to restore an abandoned Queens rail line, instead of turning the tracks into a High Line-style public park called the QueensWay — and want to to use Hurricane Sandy funds to make it happen.

The move by Reps. Gregory Meeks and Hakeem Jeffries, who represent Brooklyn as well as parts of Howard Beach and Ozone Park, could be a setback to the QueensWay project, which has been gaining supporters during the past several months and received a $467,000 grant for a feasibility study from the state last year.

The derelict Rockaway Beach Rail Line, which closed in 1962, used to connect Forest Hills, Rego Park, Richmond Hill and Ozone Park, but it has since become home to mostly trush and graffiti.

The elected officials argue that restoring the line would revitalize local economy and offer faster commute options to the area devastated by Hurricane Sandy.

“Restoring the rail line would speed up the pace of recovery for residents and local businesses and create hundreds of jobs while laying the foundation for a transportation network that accommodates our future growth,” said Meeks, who represents Far Rockaway and Jamaica, at a press conference held on Sunday in Ozone Park.
Posted by Queens Crapper at 12:50 AM

Finally. Its about time congress is thinking ahead.
How dare this eyesore be allowed to exist for 50 years.
50 years!

Of course the electeds want it restored. It's a goldmine of potential graft.

if i had a house close to it, i would be finding someone to help me sue to stop this monstrosity

At least peole are trying to get rid of this 3 mile eyesore.
Improve transportation, environment, and yes, property values.

I fail to see how this has anything to do with Sandy.

What a total Disaster for the people with all them nice houses, pools and rear yards who live along that row.
You know it wont be policed (its Queens)
Look at Flushing Meadow Park 50 weeks a year, its bushes, trails & benches are infested with lice, winos, crazy people and criminals.
If the city cant keep order in an open park how is to keep order on MILES of brush lined path ?
This should not be done unless there is a guarantee and longtime fund to pay for its own dedicated security enforcement.
I think this is all about shuttling gamblers to the casino and greed not people in the Rockaways

The A train runs to Rockaway using the old track bed. We all know how we'll the A Train track withstood Sandy. It strikes me as absurd to claim this would help during Sandy. It would have been washed out.

That said, something practical should be done with this right of way. The reality is that the LIRR once ran along the way, but low ridership couldn't justify the expenses of keeping the line.

The LIRR is very expensive to maintain with high operating costs.

A subway connection could prove more affordable, after tunneling is complete. It could connect to the Queens Blvd local line near Woodhaven, where some existing tunnels exist. This could increase local capacity at Queens Blvd, where current limits exist because of the difficulty in switching directions for trains at Forest Hills.

It could be turned to a pedestrian, and bike highway. That would be more practical than another Highline. The area doesn't have the tourist drawing powers that places surrounding the Highline do.

Perhaps the most practical transit option is to convert it for Bus Rapid Transit and bicycles. A dedicated bus route from one Subway and mall hub to another Subway would operate awfully quickly, if the only traffic it had to compete with was the occasional bicyclist.

The old track bed would have to be upgraded if a second line was added. More mass transit to a growing area is always a good idea, instead of what they did in LIC where you have to wait for 3 trains to pass before you can squeeze on.

If they make it mass transit it will be another development corridor.

Hopefully it will have a station on Metropolitan Ave by Trader Joes.

This is a solid case of NIMBYS holding the entire region hostage.

The line should be reopened via LIRR, connecting manhattan with JFK and the Casino. With direct access to Penn station and soon, GCT, it's a no brainer.

it is well beyond ridiculous that NYC is one of very few large cities that has zero direct rail access to its airports.

Anyone that lives along these tracks knows that the railroad ran through there, and if they don't, they are idiots.

A park makes no sense at all. It will not be funded or maintained. it also starts nowhere and goes nowhere, making it pretty useless. If you want to hike, forest park isn't far, and flushing meadow could be cleaned up too. Half of it is closed to the public as it is.

When you think about it, the tracks are already a park - building a path through them will just mean chopping down loads of trees. If that's going to happen, we may as well have an electrified rail line that doesn't pollute and removes millions of bus and cab trips from the streets (all of that traffic is coming through queens and brooklyn, right now - boatloads of emissions).

Also, there don't need to be any train stops on the north end of the line, so it doesn't need to become a development corridor.

Putting a train in is probably the only thing that will preserve the surrounding neighborhoods. A park will just drive up real estate values.

Would like a subway there but it'd take 5 billion and 25 years...

Leave it as it is, wild and untamed. It is a good metaphor for Queens, and what all of NYC will be like after the next big financial implosion.

My Uncle Dominick is pissed off says "OH BULLSH*T"
No running Rockaway & Jamaica ave trash through his backyard Grotto !

And they told Congress the $60 billion Sandy relief bill had to be passed in 24 hours or the children would die...

This Rego Park to the Racino run is not a Sandy victim. Let it be proposed on its own merits.

If this is leftover money, send it back to the Feds.

Joe - Unless your Uncle Dominick is REALLY old, he moved in there knowing that there were railroad tracks there, and there was a possibility that it would be put back into service.

Not in favor of running trains through the heart of Middle class housing but the tracks were there before you moved in - trade-off. Now that mass transit is essential this is probably the best way to get these trains up and running - little building or buying land it's there already. Just clear, shore up, lay track and Choo Choo!

Dominick wouldnt mind a train, he grew up under the Myrtle ave El as I did.
He dont want people, bicycles, drug trafficing, whoring, gang banging going through his yard 30 feet from his rear windows.
Thats what WILL HAPPEN if that ROW becomes a foot or bike path . This is QUEENS not Manhattan

Too expensive to start,no where to put stations. the overpasses would have to be torn down abd rebuilt.TOO EXPENSIVE.It would be more feasible to put BUS RAPID TRANSIT (select bus service)on Crossbay Blvd/ Woodhaven Blvd.......

Just pave it into a bike path. duh

I'm one for the railway