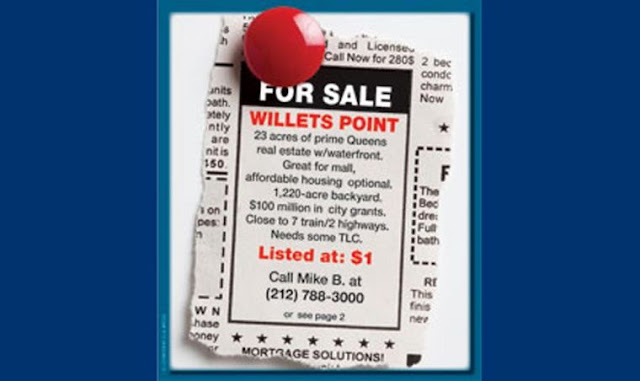 Once upon a time, there was a billionaire that took control of a city. Everyone did whatever he wanted and did not challenge him. He used lots and lots of taxpayer money to buy up land across the street from a stadium run by his fellow billionaire buddies. Then he sold it to them for $1. He also gave them $100M in taxpayer-funded city grants to build a mall. Even though one of his deputy mayors promised that the stadium owner would pay for the total cost of remediation of the land - that, if truly contaminated, hurts no one because no one lives there (save for a man that lived more than 80 years of his life there) - he put a cap on how much remediation cost the stadium owner would be required to pay at a fraction of the expected total.

Now lots of people work there, so to help his minions in the legislative body save face, the billionaire made his buddies promise to build affordable housing. But, the affordable housing has to wait for highway ramps to be built by the taxpayers more than a decade from now, even though the stadium owners can build them themselves in a shorter timeframe. Oh, but the wording of the contract was changed to make sure they don't really have to build housing at all...

Then there's the free parkland they're going to build their mall on.

To make a long story short, after crying over Madoff, the Wilpons are now laughing all the way to the bank at our expense.

How do I know all this? It's in this week's Queens Chronicle. I suggest you read Joe Orovic's excellent expose and then call up your elected officials and ask them if they think the "fool me twice" saying applies here.
Posted by Queens Crapper at 12:00 AM

WPU...keep up the good fight.

Der mayor will be gone soon and will never see
the area developed for his friends the way he demands.

A project delayed is a project that doesn't get built...not in this economy.

This is bait-and-switch on a very grand scale.

In 2008, the Willets Point triangle is said to be the target of development. We're promised remediation and housing, among other things.

Then in 2011, Sterling (owned by the Wilpons, who own the Mets, whose Citi Field is located across from Willets Point) and Related submit an RFP response that does not principally develop the Willets Point triangle, but instead calls for a casino to be built on property west of Citi Field -- property that was nowhere mentioned within the RFP. Moreover, Sterling/Related specifically proposed NO housing be built, and sought to minimize remediation and costs thereof to the greatest possible extent.

After a secret selection process that violated multiple written promises made by the city, Bloomberg rejects 3 other proposals (that conformed to the property boundaries of Willets Point as set forth in the RFP), and announces in 2012 that Sterling/Related will develop "Willets West", an entertainment/retail center (located where they had proposed to build the casino; and we're asked to believe that they have eliminated the casino from their plan, even as the legislature decides where to open new casinos downstate) -- and they claim they will build some housing on the Willets Point property, but not until 2025. They are entitled to build NO housing, upon payment of a penalty. And, they cannot build housing unless new access ramps will have been constructed to and from the Van Wyck Expressway -- ramps that were never evaluated in connection with the development scheme now proposed. This is tantamount to eliminating the housing altogether -- housing that had been the linchpin of the development when it was discussed and approved during 2008.

Moreover, the price agreed to by the city for the sale of 23 acres of Willets Point property, to be paid by the Wilpons' Sterling company plus Related, is $1 (one dollar; not a typo). This is a large swath of property located just 5 miles from Manhattan, slated to become "New York City's next great neighborhood", if you believe the EDC PR -- and developers will pay $1???

...and they all lived happily/miserably ever after.

I pledge this to the city and its citizens.

I am willing to pay up to ten times that amount ! in return I will responsibly develop the land, get whatever needs to be remediated , remediated! In the process , I will create both temporary as well as permanent and meaningful jobs. I will be respectful and considerate to the surrounding communities.

TEN TIMES THE CURRENT OFFER. EHAT DO YOU SAY?

Sorry, Alfredo -- Only applicants who own an MLB stadium and who have schemed for 20+ years are eligible for this deal.

unless I'm counting wrong, there r 2 exits in this area--the well known from the north, and the unknown from the south----but too many of my secret routes are all ready too well known.....