Flushing Commons to be built in phases 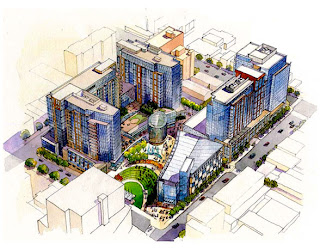 Civic leaders reacted with skepticism after the city announced Tuesday that Flushing Commons will be built in two phases beginning this fall.

Developers of the long-stalled, mixed-use development are expected to break ground on the project in November, according to the city Economic Development Corp.

The $850 million project has been slated to rise over Municipal Lot 1 ever since a special permit was approved in 2010. But the major players — EDC, TDC Development and Construction Corporation and Rockefeller Development Group — left the parking lot untouched for years with virtually no explanation until this week.

The first phase of the project will include the two community benefits outlined in the original proposal — a 1.5-acre public open space and a 62,000-square-foot YMCA. It will also feature most of the total proposed commercial space, about 350,000 square feet, and about one-third of the housing, or 160 units.

Neither EDC nor the developers had a projected start date for phase two, which includes 450 residential units, 150,000 square feet of parking and 15,000 square feet of community facility space — a zoning designation that allows specific uses that would benefit residents, but is often sought by developers because it can allow slightly bigger buildings.

Because only the southern half of the parking lot will be developed first, the city and TDC maintain that no parking will be lost during the construction process.
Posted by Queens Crapper at 12:48 AM

That seems impossible for no loss of parking during construction. This parking lot has been talked about for I believe over 40 yrs. At one point about 20 or 30 yrs ago there was a plan proposal to make this downtown Flushing municipal parking lot into a bus terminal to have all the buses drop off and pick up instead of spread out on Main Street, Roosevelt Ave, and the other avenues off Main Street. But since that plan was appearantly scrapped, I'm very unhappy about this approval to build this commercial development. This is the end of Flushing as a middle class, single family home, residential, quiet, desireable neighborhood. ..maybe its time I consider moving out of New York!

No need to leave NYC for the boondocks in desperation.

Move at least 2 miles further east where the low density zoning (R1-2A) is on a par with Riverdale.
I would recommend Broadway, Auburndale, Bayside, Douglaston or Little Neck. Forget Murray Hill.

There, the Port Washington LIRR line can zip you past all of the downtown Flushing crud in a flash.
At your own pleasure, you may spit at conditions below, as the train speeds swiftly by Floo-shing.

The quality of life remains very good in the northeast, and is fiercely protected by strong, well organized, civic associations. It won't erode!

As for the the downtown hub...it's doomed.
It will finally reach its zenith in the form of an overcrowded Taipei, with the completion of the Flushing Commons project (if it ever gets fully built, that is).


Meanwhile, you can thank those corrupt thieves at CB#7.
They were the ones that took the first steps and sold out Flushing.

Apparently TDC is attempting to butter us up by offering the public amenities to be built first.

forget it, Jake. Its Chinatown.

I'm not an architect. I'm not even good at math. But WHERE do they think they are putting 1.5 acres of open space? Maybe plant a tree on each floor of the building nad add it up? HOW will this not create LESS parking spaces?

No one's breaking anything...

Well, someone said to me that Flushing Commons will not happen, they will not start construction in November.

Actually, my relatives lives are better back home than here. I'm only stuck here because my parents assimilated too much into American society and I am not bilingual so I cannot move back. Are you saying that NYC is more advanced than Hong Kong? FML give me a break! I'm trying to learn Chinese now JUST to immigrate OUT of the US! I already have dual citizenship due to a loophole in HK law. Now i just need to learn Chinese so I can survive there!

I'm not sure I understand why they want to, or need to, build another YMCA. The Flushig YMCA already exists just less than 2 blocks away on the corner of Northern Blvd and Bowne Street, across the street on Northern Blvd from Flushing High School.

No bus depo just a bank? They are almost done with the first building on the lot. We have to wait 20 minutes sometimes for the bus to just TURN the corner bec of the traffic now. I can't imagine what going to happen to main street.The business have blocked turning main street one way. People should not be allowed to park on the busy park of main street AT ALL.

I cant believe we dont get a bus depo what a joke! FLUSHING is being robbed left and right.

And the word depot was robbed of its T.

Finally, it starts, talk in years. Can't wait to see the new development. Thanks NY