We need one of these for every Queens CB 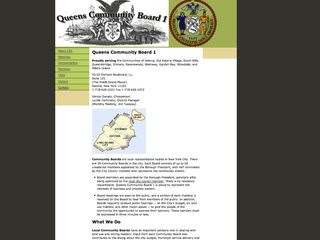 Will the real Queens Community Board 1 please stand up?

A mock website surfaced recently that looks to be the actual site for Astoria's CB1 — except that it's loaded with satirical digs at the board, painting its members as elitist and out of touch with the rest of the neighborhood.

"Queens Community Board 1 is proud to represent the interests of business and property owners," the "About" page of the phony site reads.

"We have a certain amount of clout with elected officials and city agencies," another page says, before adding that the board's role is to "provide helpful cover to local elected officials when they take positions at odds with the majority of people in the community."

The fake page lists a number of the CB's most contentious past issues as "accomplishments" — including votes against a pedestrian plaza on Newtown Avenue and a bike corral at the Queens Kickshaw restaurant — and criticizes the board as favoring the interests of drivers, developers and property owners.
Posted by Queens Crapper at 12:52 AM

I would definitely love to see
a similar hard biting satirical web site set for CB#7.

Those out of touch, bullying SOBs, need to have their butts kicked real good! That board of self serving bores, is long overdue for replacement.

CB#7 is becoming known as "the board of the rubber stamp", when it comes to approving over development projects.

I wonder if we really need these WINDOW DRESSING community boards in the first place.

Like I've said before, these TOY GOVERNMENT bodies (whose votes don't even count) are loaded with TIN DEMAGOGUES who think that
their doo-doo smells like Chanel #5.

I now expect some angry counter posts, from community board members and supporters alike, for my unabashed opinions, so FU all in advance!

It certainly seems real to me, sure this is not actually from the real site.

Many community boards are the equivalent of the Human Resource Department of Companies, HR makes you think they are for the people but in reality their purpose is to protect the company.

If Community Boards really were what they say they are, communities would not have the problems that they have, especially in problematic neighborhoods.

I love the depiction of the Hell Gate bridge in the mock web site, since CB 1 is the community board from hell!

We hear that gone to seed, Chairman of CB#7 Gene Kelty, was taken to task for his nasty comments at a recent meeting.

Is it true that Councilman Dan Halloran called for his dismissal from the board?

Way to go Dan! Gene has been serving himself there for too damn long.

How about recommending that other shady member Chuck "follow the buck" Apelian be terminated and replaced.

Maybe that whole board needs to be turned over.

"We need one of these for every Queens CB"

I think you just gave yourself an assignment...

I like how the zoning chairman is the architect that 'designed' that pile-of-crap 'garage house' on 30th street just off Broadway. I'm sure he has designs for a whole community of garage houses to line ole walken's alley with.

How dare these people affront my friends like that. They have one hellova nerve!!

Thank you. Not me, at this moment.

I've already tirelessly served my community and borough for well over a quarter of a century.
It's time to sit on the porch a bit, and take a brief breather.

Setting up a satirical mock CB 7 website is somebody else's job now, but I'd be very glad to contribute to it, if one emerges.

There's got to be somebody out there with "balls" (females included) and skill to start one.

How about one of you? Stand up and serve!

Gives you an idea of what Queens looks like once Vallone becomes beep.

Stop Pete
The little Creep
From being Beep!