The most harebrained bicycle scheme yet 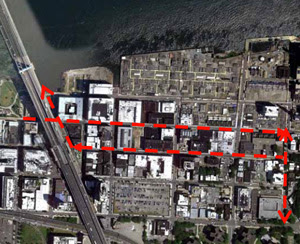 Residents are not please with the idea of dozens more cyclists zipping through their quiet neighborhood, but it's this last part, the removal of the historic Belgian Block stones, that irks them the most. Vinegar Hill residents started two petitions to stop the Greenway's plans for their neighborhood.

One demands the Greenway bypass Vinegar Hill, and the other specifically addresses the historic streets:


I oppose the use of machine-made or machine-altered cobblestones of any kind or for any purpose in Vinegar Hill because they are incompatible with the designated historic character of our landmarked neighborhood, of which our Belgian blocks are a vital and irreplaceable component. I also oppose the addition of a bike lane on Water Street made from anything but our own historic Belgian Blocks.

The petition to save the Belgian Blocks currently has more signatures than the one to stop the bike lane.

So let me get this straight...the City's most pressing road-related priority is to rip up preserved 19th century Belgian Block to replace it with modern Belgian Blocks so bicyclists can ride "along the waterfront" between the projects and a sewage treatment plant. I don't even think the cyclists want this one.
Posted by Queens Crapper at 12:34 AM

If it ain't broke don't fix it!

"Residents are not please with the idea of dozens more cyclists zipping through their quiet neighborhood"
Because those noisy bicycles will somehow compete with the noise of cars driving on cobblestones?

That picture seems to have found the one spot where the cobblestone is not patched with asphalt after being dug up for something or other. Check out these streets on google street view. The city want's to put in similar looking material. It may not be a perfect idea, but at least they're trying, which is more than you can say for the many contractors who have destroyed the rest of those streets.

If they want bike paths along the water, they should build a park on the edge of the river.

Oh wait that would entail investing in a park...

It's more "make work" for Mikey's favorite contractors. Wonder what his under the table cut is on this one?