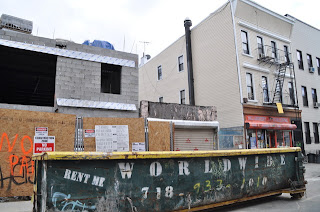 Spurred by the rapid boom of new housing developments and businesses, local community leaders are asking the city to rezone Bushwick to help stop high-rise buildings, bars, liquor stores and storage facilities from taking over the neighborhood.

Bushwick Community Board 4 members believe the rezoning is necessary "to preserve the unique character of Bushwick," they wrote in a letter to elected officials.

"To help manage the growth and rebirth of the Bushwick neighborhood we feel the time is right to begin rezoning," the members wrote to City Council Member Diana Reyna and other officials. "We want to be able to decide and identify which areas of the district are suitable for higher density housing."

The rezoning, the letter said, should also require "down-zoning" to ensure that high-rise buildings not spring up on residential streets. And the city should address "recent community concerns regarding the proliferation of bars, nightclubs, liquor stores on the main streets and avenues, and box storage warehouses," members wrote.

Proponents of the zoning changes say the new rules for buildings — which the city's Department of City Planning would ultimately decide — are needed to save Bushwick from exploitation by developers, affordable housing advocates say.

Paul Graziano, Candidate for the 19th Council District and an urban planning/historic preservation consultant, stated this to me: "Bushwick is about to become the perfect storm. Because of the wrong-headed zoning changes that happened in 2005 in Williamsburg - where thousands of people and businesses were displaced due to massive upzonings along the waterfront and conversion of industrial to residential zoning - many people packed their bags and moved east into "East Williamsburg," otherwise known as Bushwick.

While Bushwick has had severe disinvestment and poverty due to a horrendous lack of interest from subsequent administrations - and collusion with non-profit organizations connected to powerful politicians created to fill the gap in what should be the City's responsibility - the kind of 'turning point' that Bushwick is facing, with a substantial influx of young people, bars, clubs that is radically changing the composition of the neighborhood is setting up this area for another push from the moneyed real estate interests to allow them for MORE development, not less, which will again - force - many people from their homes and livelihoods, just like the Williamsburg rezoning did.

From my experience, downzoning is a reasonable strategy to stop this from happening, but it has to be paired with other controls: landmarking, particularly along Bushwick Avenue, which has significant historic resources; educational improvements to the public schools, not more private charter schools that use public money; business retention programs and the creating of a merchant's association (if there isn't one already) along Broadway; and true re-investment in this community, instead of handing over tens of millions of dollars to politically-connected private social service agencies."
Posted by Queens Crapper at 12:19 AM

If you don't get conditional rezoning that greatly increase (affordable) housing around the old BMT Broadway El, you're going to get a spike in rents that will drive the current residents out. It happened in Williamsburg when they restricted housing density regardless if it was near the L or JMZ. That restricted supply, prevented new affordable housing construction for long time residents and jacked up the rents.