Does scaffolding law need to be reformed? 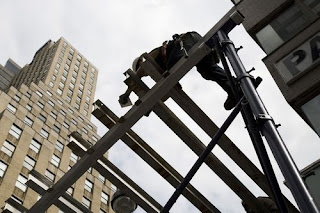 Building owners and developers are gearing up for a major push in Albany to reform New York state's infamous scaffolding law. The law, which dates back to the late 1800s, was once a model of progressive safety standards on construction sites across the nation. More recently, however it has become a huge insurance headache for contractors who blame it for driving insurance rates to such levels that they are actually forcing up construction costs—and in some cases even stalling projects, according to the industry.

Mr. Jaskiewicz was an organizer of a panel Tuesday morning before the Greater New York Construction User Council to discuss the issue. Speakers at the event held at Scandinavia House on Park Avenue argued that New York has put itself at an economic disadvantage as the only state with a scaffolding law, known as Section 240 of the state's labor law code. Whereas every other state puts an equal burden on the worker to ensure they are protecting themselves at work, New York places an absolute liability on the developer and contractors.

One example given was that if a worker falls or is injured by faulty scaffolding, the property managers are held liable regardless of unsafe behavior by the worker. Insurers typically make seven-figure settlements rather than risk an even bigger loss in court, but this has driven up the price of doing business. With New York City already the most expensive construction market in the country, developers and contractors are looking for any opportunity to reduce costs.

"We're not saying that workers shouldn't be protected, of course they should be, that's our top priority," said Louis Colletti, president of the Building Trades Employers Association, a contractor group. "We're just saying we want the ability to present evidence in a liability case that can exonerate us if the worker is at fault. Right now, we don't have that."

The labor unions were not represented at the panel, nor were trial attorneys. Both groups are the law's biggest backers. They have argued that if the contractors are doing their job, and the scaffolds and equipment is properly secured, they are free from fear of liability.
Posted by Queens Crapper at 12:26 AM

From the article: "The industry is actually arguing that reform would also benefit unionized construction workers by reducing the cost of building and thus creating more projects with more jobs for labor. As it is, the rising costs are pushing contractors and developers to seek non-union workers for jobs, they claim."

Please, let's look at what is really going on here.

The developers want the ability to hire non-union workers of questionable qualifications, then if one of them gets injured or crippled they can throw a high-powered layer against the worker's claim.

I never thought I'd say it, but, we need the 'commie threat" back again to scare the s--t out of these bastards.

Lately in this city, whenever I see an instance of a developer (or developers) essentially whining (oh poor me, poor me, the laws are cutting into my profits!) I think, "Good. It's about time. Now how can we all make their lives even more difficult."

Other cities are better at getting projects built that make sense with their surroundings and are ultimately good for their citizens and their neighborhoods.

Since Bloomberg, our city basically just wants to give everything away. Neighborhoods be damned.

It doesn't have to be this way. Developers can still make money. Construction workers can still get jobs. Our city just needs to make developers fall in line and follow the rules. If that happens developers will make a little less money but they'll still make plenty of it. Don't worry about them. They'll survive - like pigeons (they're always going to be there so there's no need to feed them).

The dumbest thing Bloomberg has supported (lately) is the idea of changing the zoning restrictions around Grand Central so as to encourage more high-rise development in that area. A change like this will put a number of multi-story historic buildings at risk of demolition.

The argument is that New York needs to compete with other cities by providing similar types of office space. Who are we trying to compete with, Charlotte North Carolina?

This is backwards. We shouldn't be trying to compete with places like Charlotte. We don't need to. Charlotte wants be more like us. But, it's never going to be like us because the stock of historic buildings that New York already has will never be built again - EVER!

Therefore, the buildings around Grand Central should be thought of as a rare and irreplaceable commodity. Their presence makes our city unique and inherently valuable. And, because of this unique value, people will still want to live and work in New York.

As far as other opportunities for new office development in the city, there are still plenty of locations to choose from. If the argument is that they aren't as well served by mass transit as the area around Grand Central then the focus should on providing mass transit in those areas (which would then bring jobs and development there).

anything that a developer wants is bad news for us.

Well said & Hear hear !
You hit the nail on the head.

Debris falls from panels on passersby. I've found sand (if it is that pure) grinding between my teeth from work above. Most folk don't care, they in hurry to get going and don't have time for safety. Fact be, they harass the city when they try to up safety.

I'd like to see some strong scaffolds erected on the steps of city hall to hang some our crooked pols--
unless you'd prefer a few Guillotines instead?