Why council members do things against their constituents' best interests 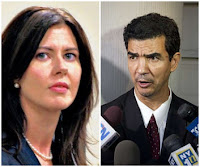 Two City Council members who have accepted more than $9,000 in campaign donations from the livery industry yesterday joined the suit against the city to stop yellow cabs from taking smartphone hails.

Both pols said the campaign contributions were irrelevant.

However, a source directed Betabeat towards records from the New York City Campaign Finance Board and New York City’s Doing Business Portal, which show that the two Council Members joining the case both received financial contributions from livery and black car lobbyists as well as the plaintiffs in the case. Council Member Rodriguez, a former livery driver himself, received $3,000 during 2010 and 2011 from both Dial 7 and Carmel, two of the lead plaintiffs in the case. Council Member Crowley was given $2,200 between 2010 and 2011 from lobbying firm Constantinople and Vallone, which represents the two black car companies, as well as from their lawyer, Randy Mastro.

For Rodriguez, Dial 7 and Carmel count as some of his top non-Union donors, and Avik Kabessa, Carmel’s CEO, is also President of the Livery Roundtable.

Although Council Member Rodriguez’s office said no official comment would be given until tomorrow morning, Eric Yun, Crowley’s Communications Director, called the donations a coincidence that was diverting attention away from the real issues.

“These donations were made more than two years ago, and Council Member Crowley is close to the Vallone family, having worked with Vallone’s son, Peter Vallone Jr., in the City Council for years. Peter Vallone and Anthony Constantinople’s firm represent many clients in the city,” Yun said.

Reread Mr. Yun's statement and let it sink in for awhile. Whoops.

Now let's think about this from the consumers' perspective. Yellow cabs generally cost less to ride than livery cars. Why would these council members support the public - their constituents - paying more for a service unless they were lobbied and legally bribed by the special interest trying to stop this? And since yellow cabs are not readily available in most outer borough neighborhoods, and most livery service trips occur in the outer boroughs, how much business will the livery drivers really lose because of an app?
Posted by Queens Crapper at 12:29 AM

Dizzy Lizzy...on her back and smiling...Crowley,
has always held quite a record for f-----g over her constituents.

Hubba, hubba!
At least it might have been a good screw for the few in power that she sold out to.

This pol, by any other name, still remains the political slut she's always been.

There is that Vallone name popping up again.

Why are we surprised by Liz Crowley's actions? She always votes against her constituents. Dump this bimbo!

It may not be about aquiring passengers. I'm only guessing but I think it may have to do with mandatory inspections, safety standards, insurance etc. imposed by TLC and City Hall. BTW every politician who leaves officee gets to keep 100% of the campaign donations.

Because that's how they are born.

Liz Crowley: politically on the take and on the make in the backseat of cars in parking lots.

Hey Middle Villagers, caught your council member in City Hall last week at a hearing. What an embarrassment! She actually sounds like she has a speech impediment and was asking the dumbest questions. Someone should tell her to keep her words down to one syllable because she definitely has trouble with more than that. How did this one ever get elected?

CROWLEY'S COMMUNICATION DIRECTOR ERIC YUN IS AS CLUELESS AS HIS BOSS.

Liz, your gettin' old and your "charms" are fading fast.

Better pucker up on overtime to secure your retirement.