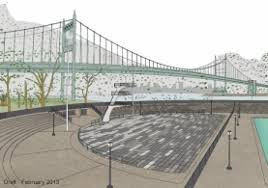 Two weeks ago when plans were released for a once $1 million, now $4.3 million project to transform the defunct art deco diving pool next to the Astoria pool into an amphitheater, the reaction from some was “huh?”

How did a plan quadruple in price?

At first, based on a meeting held on Feb. 20, the price tag seemed to have skyrocketed because of materials. However, the cost of cement hasn’t matured like gold.
Asked to clarify, a city Parks Department spokesman said the scope of the project has grown.

Councilman Peter Vallone Jr. (D-Astoria) allocated the money for the proposal. He wants to see shovels in the ground before his term-limited tenure expires at the end of the year — although he does aspire to represent Queens as the next borough president — but is not happy with the escalated price.

As for comments online that the money should go toward oft-neglected Flushing Meadows Corona Park instead, Vallone responded that “the argument isn’t about if money should be going to different Queens parks, the argument should be why it goes to other boroughs and not Queens.”

Because our elected officials suck, that's why. And Vallone allocated $1M, not the whole $4.3M, so why are so many taxpayer dollars from outside Astoria being fed into this money pit?  They won't even have a $2M crapper like Elmhurst Park has.
Posted by Queens Crapper at 9:21 AM

"Two weeks ago when plans were released for a once $1 million, now $4.3 million project to transform the defunct art deco diving pool next to the Astoria pool into an amphitheater, the reaction from some was 'huh?'"

Queens had an amphitheater at Flushing-Meadows Corona Park. Ask former Borough President Claire Shulman what happened to it!!!

Haven't we been here before?

1. dedicated to a theater workshop specializing in kids and senior programs. Lavish amounts of money spent on the councilman's whims (great photo ops, get it?)

Do we need yet another thing named after the Vallones?

2. A complete farce as a cultural setting: no protection from weather, no place for light equipment, good only for a few months a year and only during fair weather, diving platform center stage, most of seats face the stage wings rather than center, with bricks as a stage surface there is no place for dance groups to perform without bringing in equipment, 40 feet from noisy largest public pool in NYC, no back stage but backdrop of open fence into pool, no sanitary facilities, no food concessions, park regularly smells like open sewer from being between 2 sewage plants, loud music on Shore Boulevard ....

The funds should be spent in Flushing Meadows or other parks where repairs takes months if not years and regular maintenance is spotty at best.

This is the poster child for the dreadful cultural scene in most of Queens where the money is spent on the local councilman's taste and calculated press coverage rather than adequate maintenance or cultural sophistication.

Ask Peter Vallone when he goes into your community seeking the borough president about shifting funding from this self-aggrandizing boondoggle to the real pressing needs of your community.

If he claims that Queens overall is not getting enough funding then where was he when City Council was working on the budget? Is that the person that you want sitting in that chair in borough hall?

Why so surprised? The price went up because all the politicians and their friends and family have to line their pockets with taxpayer money.

What a shocking turn of events! Truly shocking!

I can assure you no one around here wants that stupid thing.

I wish they'd cancel the stupid fireworks show too. The area fills up with idiots parking in front of hydrants, in driveways, etc on the one night a year that happens. Then the epic amount of litter afterwards reminds everyone for days after.

Maybe because Vallone represents Astoria not Flushing/Corona. Councilmembers represent the area they were elected to represent. GET A CLUE!!!

Nope. He allocated $2M to refurbish the roof of the bathhouse and $1M for the amphitheater.

In 2011... That article also says the project will be completed this year...

So you mean to tell me that since 2011, Pete poured $3.5M MORE from his pot of money into this money pit?

Is Peter Vallone Jr. going to skinny dip in the pool?
Or is he only used to dipping into us taxpayers' money
for follies like this one?

It looks like you're spewing nothing but platitudes,
as usual.

Poster 2, great stuff, but it looks like not all the coverage this got is what Vallone calculated, is it?

The money should be going into alleviating the eroded infrastructure of our sewers in Astoria so the flooding stops.