Johnny kicks off mayoral campaign by repeating a lie 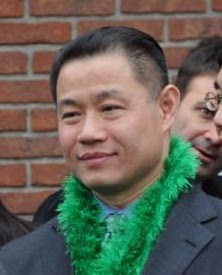 City Controller John Liu officially kicked off his mayoral bid Sunday by touting that he worked in a sweatshop as a child - a biographical claim the Daily News debunked years ago.

Speaking to supporters from the steps of City Hall, Liu pitched as cherished fact his childhood work alongside his mother in a sweatshop — but his parents said during the Democrat’s 2009 campaign for controller that their son's version of history was incorrect.

"My dad took a job far beneath what he had had in Taiwan," Liu said Sunday. "My mom spent years in a sweatshop, where I often had to pitch in to make ends meet."

Four years ago, The News investigated Liu's “sweatshop” story — his campaign had run ads featuring bleak factory scenes — and learned from his mother, Jamy Liu, that she never worked in a sweatshop.

She said she mostly worked from her Flushing, Queens, home on a knitting machine and that her son would help her, getting paid 25 cents for every ball he spun on a yarn-spinning tool.

John Liu’s father, a banker named Joseph who owned the middle-class home where his son was raised, confirmed in 2009 that his wife never worked in a sweatshop and neither did their son.

After The News broke the story, Liu acknowledged it was an exaggeration, telling the newspaper’s editorial board that he bought candy with the money his mother gave him for helping her.

Mr. Liu might well believe that voters will treat the accusations against his associates no more seriously than he himself seems to regard them. The polls indicate at the moment that he is making a serious miscalculation—he trails Council Speaker Christine Quinn and Public Advocate Bill de Blasio. And if you think they’ll remain silent about the Liu campaign’s transgressions, you haven’t been following New York politics very long.

Some of Mr. Liu’s supporters, particularly in the Asian-American community, have suggested that he is the victim of a racist plot, presumably orchestrated by anonymous power brokers who can’t bear the thought of an Asian in Gracie Mansion. To his eternal discredit, Mr. Liu has not dismissed these ridiculous accusations out of hand. If anything, he has stoked the paranoia, saying that “something is driving this so-called investigation.”

Well, he’s right about that—something is driving this investigation. And that something is his campaign’s dreadful fund-raising practices.

It’s a simple matter, Mr. Liu: if your campaign had followed the rules, you wouldn’t be in this mess.

The man should be preparing to leave public service, not asking for promotion to the city’s highest elective office.
Posted by Queens Crapper at 12:31 AM

He's never known how to tell the truth.

So long, Johnny. A disgrace to this city.

Once a Liu, always a lie.

John Liu isn't kicking off anything.

His political career has already been kicked into the gutter. He will never become mayor.

Liu is just whistling as he walks the graveyard.

Asians hate to lose face...
so Johnny is maintaining his bravado attitude until the end...which is very near.

All Liu-specific nonsense aside, "home work" was far, far more odious than sweatshop work - it is often tied to piece-rate payment, rather than hourly wages, and workers, and their families, may be exposed to hazardous contaminants and conditions... as for Liu, my god! his own mamma says he's a liar, liar, pants on fire.

He thinks he can run things like back home in his savage nation. He might be able to fool the other animals in little shanghai there, but outside that enclave, the media is not state run.

This is NOT a run for Mayor, in my view.

This is a campaign to raise donations, and thereby, matching funds to pay for lawyers in his campaign corruption case.

This should be a crime. No politician should be permitted to use campaign money to pay lawyers. That is clearly a recipe for a crooked campaign.

As to the idea of paying lawyers with "penny-one" of matching funds...that should net a politician life in jail. It's not what matching funds were ever intended to do. It’s immoral, unethical and should be a serious felony.

John Liu has ZERO shot at being mayor and in my view he has disgraced his culture, not enhanced it. That's a shame as there is a great and honorable history of the Chinese people and it is great when honest people step forward and show honor.

Why he think we in Hawaii?

Thomson:Quinn::Obama:Hillary, says all the big money

Somebody ought to kick this puny ponce in the ass...lose a shoe up there!