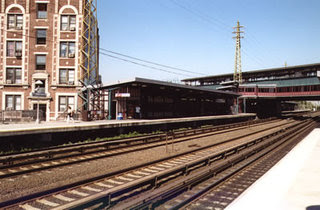 One unfortunate elevator at the Long Island Rail Road's Woodside station in Queens has been inundated with so much urine that its floor has rusted and warped, interfering with its door mechanics and frequently forcing it out of commission.

"The mechanics of the elevator are constantly being contaminated," said LIRR President Helena Williams during an LIRR committee meeting Monday, where she described the lift as having a "vertical urinal problem."

As a result, the elevator, which shuttles riders from the station's mezzanine-level to an LIRR platform, was only in commission 58 percent of the time in February — versus 97 percent for elevators across the LIRR system — making it the worst-performing lift in any LIRR station, an MTA spokesman said.

“The deterioration is significant," he said, adding that maintenance crews weren't sure exactly why the elevator was such a target, considering it was just one of five lifts at the station.

Adding to the mystery is that the station also offers rare public toilets on the mezzanine level.

But the elevators also aren't the only parts of the transit system that have needed to be overhauled because of frequent toilet stops.

Years ago, subway cars had vinyl floor tiles that were laid over plywood. But over time, the plywood floors began to rot and smell foul — which subway officials attributed to urine damage.

The reason there is so much pee at this particular station is the proximity of so many bars. Years ago, when I had a 4:30am commute through that station, I actually had to step over the Long Island drunks passed out on the LIRR platform who I assume were headed home after closing time in Woodside.
Posted by Queens Crapper at 12:10 AM

If they made a public bathroom on the ground floor level, it'd solve a lot of the problems. The drunks, unfortunately, aren't going anywhere.

Too many of Donovan's patrons who can't hold their beers?

Put in restroom as previous posted suggested or a port-a-potty - dosn't cost much vs ruining elevators!
Also put in a camera in the elevator and arrest the pissers or what ever else they are doing illegally! ENFORCEMENT IS KEY!

There is also an issue of a LOT of homeless people camping out at that station on the ticket selling platform. I think the police need to start rounding them up and sending them to homeless shelters.

There is also an issue of a LOT of homeless people camping out at that station on the ticket selling platform. I think the police need to start rounding them up and sending them to homeless shelters.
---------------------------------
Good idea. Notify the MTA police. They are stationed at the Jamaica LIRR station.

Public restrooms won't necessarily work. Ever see what goes on in the mens bathrooms at Roosevelt Ave, 71/ Forest Hills, and 179 Street??

Ever get off at Woodside at night? Hear all the bar room singing? Wonder were all the urine came from? If they drank sugary drinks instead of beer, they would piss less!

Just lay a big sheet of plastic down on the ground. Problem solved for less than $5.

Anon Nos. 6 and 8: Who says that thet guys doing the pissing here are homeless?

Install a urinal in the skelevator. It's the only solution. I don't agree with euthanizing the homeless as some of them are veterans.

Ever get off at Woodside at night? Hear all the bar room singing?
----------------------------------
Not as much singing as there used to be in that area, at least not by Irish tongues. Ever see what hangs out in Sean Og's Irish pub on 60th and Woodside Ave on Friday and Saturday nights? Alot more Koos and Kwans there nowdays than Timothys, Pats and Colleens.

Gotta love the above solution!

Round up all the illegals send them back to their slummy homelands to piss on, and there wont be alot of piss stink ANYWHERE!!