Vallone to medical building victims: "It sucks to be you." 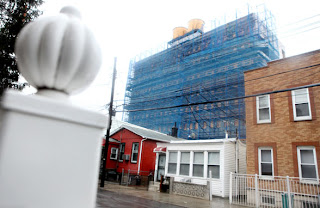 City Councilman Peter Vallone Jr. (D-Astoria) said while an eight-story medical building under construction in Astoria has damaged multiple homes nearby, he would like to see the building completed rather than being left to deteriorate.

“That’s a very difficult situation. I’m extremely unhappy about it,” he said. “But unfortunately there’s no right way to do anything about it.”

The city Board of Standards and Appeals is expected to make a decision within a few weeks about the continuing construction on the site, at 25-31 31st St. The developers of the eight-story medical building and 135-car parking garage are Pali Realty LLC, of 150-49 7th Ave. in Whitestone.

Community Board 1 recommended the BSA grant the building a rezoning for the mistake, Vallone said. While he called the damage caused by the project “inexcusable,” he said the board decided that recommending a complete stop on construction would leave the structure an unfinished hulk in the neighborhood.

Vallone said he would be working with both CB 1 in support of the zoning as well as with the homeowners. He said the zoning issue was different than the issue of the destruction, and he expected they would have to go through lawyers to get their homes fixed or rebuilt.

You'd think Vallone would come up with something better than, "Sorry, but we have to let them finish." The correct thing to do would be to force them to tear it down. It's been done before.  But that would piss off developers and their lobbyists, not to mention require real leadership.
Posted by Queens Crapper at 12:57 AM

There's an alternative Don Pete...
tear the building down!

Ah...
but the developer might ask Pietro to return their campaign donation.

Simply put...
the Vallones have been a blight on our borough!

LIC-Astoria has become the asshole of western Queens...so, what's one more turd like this, left upon its sidewalks?

That's the way the Vallones look at it.

Besides,
they live very far away from this kind of shit!

You get what you vote for, so boot the Vallone mafia!

Before I would make them rip it down I would offer them a choice. Rip it down or buy all the houses that are affected and rip them down to make some nice green space for the community. Of course the homeowners can refuse but the developer will just have to offer them a bonus over the price of their home. Everyone has a price. If the homeowner will not accept a huge profit then they stay and quit complaining.

As Don "junior" Pietro Vallone violates his victim he tells her (or him), "And that's the way it works"! Can you imagine what the Vallone dynasty would do to Queens if this political mobster, Don Pietro a la famiglia di Vallone, becomes borough president? You'd see an unbridled rape, pillage and plunder spree that would rival Donald Manes. The Vallones are real estate lobbyists...period! Maybe the Vallones have already received campaign contributions from the developer of this building. At any rate we can clearly see who Don Pete supports in this particular case. He chose the developer over the homeowners. He doesn't care because he doesn't live there.

Things are so bad in CB1 and Vallone's district that the community finally had to step up to this:

Not bad where the old timers act like they are part of a witness protection program and the hipsters care only about the merits of craft beer and cheese.

Myth
Before I would make them rip it down I would offer them a choice.

REALITY
THERE ARE NO CHOICES, ONLY SCRIPTS TO BE FOLLOWED IN VALLONE'S DISTRICT

Myth
Rip it down or buy all the houses that are affected and rip them down to make some nice green space for the community.

Myth
Of course the homeowners can refuse but the developer will just have to offer them a bonus over the price of their home.

REALITY
HOME OWNERSHIP IN ASTORIA: WE LOVE OUR 150 YEAR OLD HOUSE, THE FAMILY HAD MANY WONDERFUL TIMES THERE, GRANDMA BOUGHT IT FOR $3,000, THE KIDS DID NOT WANT TO LIVE IN ASTORIA (aside: wonder why?), A DEVELOPER OFFERED US $3,000,000 FOR THE LOT, THANK HEAVENS WE DID NOT LANDMARK IT, YOU CAN UNDERSTAND OUR DECISION (aside: if it was landmarked you nitwits it would have gone for $4,000,000)

Myth
Everyone has a price.

REALITY
YOU DON'T GET OUT MUCH, EH? OR IS IT JUST THE WAY PEASANTS ARE RAISED?

Myth
If the homeowner will not accept a huge profit then they stay and quit complaining.

REALITY
DIVIDE THE COMMUNITY AND CONQUER IS AN ART FORM IN VALLONIA,

AND PUT UP OR SHUT UP OR YOU KNOW WHAT IS COMING TO YOU IF YOU DON'T IS THE FORM OF GOVERNMENT YOU HAVE IN THE LITTLE WORLD OF VALLONIA.

MAYBE WHEN THEY SEE HOW LIVES ARE PLAYED OUT BY THE MISERABLE LOCALS, THE REST OF QUEENS WILL COME TO THEIR SENSES AND JUMP ABOARD, WHAT DO YOU THINK?

He said the zoning issue was different than the issue of the destruction, and he expected they would have to go through lawyers to get their homes fixed or rebuilt.

So why doesn't daddy give something back to the community - make a healthy donation to the Steinway mansion, take on this case for the homeowners pro bono?

The Vallones and their developer buddies have made enough money in Astoria.

And its absolute garbage on what they tell people as to 'the way things work.'

Take note Queens when you see that name Vallone on a ballot and remember these words:

Someone once said you can treat people like mushrooms. Keep them in the dark, feed them shit, and when they stick there heads up cut them off.

Who is the developer?

And who owns Pali?

Take it down. Put it up right. By code and without the crap.

What I want to know is.

Really? That is a switch cause for a generation its been the Vallone's neighborhood and their minions on that community board.

To paraphrase the Robber Baron creed: "What are you going to do about it"

I know a person who asked to be on Vallone's community board one. He told me the following: they asked him if he was a property owner or owned a business. He replied he did not. Then it be difficult to get on the board he was told. He responded that it was not part of the official criterion.

Their reply was something to the effect that it was their criterion and he could complain to the borough president.

Explains a lot, doesn't it?

If you do not want your community board to look like or to conduct its affairs like Vallone's community board, you might want to demand two things from him when he shows up politicking for the borough president's office at your group:

1. demand that Vallone submit a bill to city council that the demographics of a community should be reflected by its community board.

Extract from him those two promises or tell him no vote from you or your group.

Make clear to him that you know his record and that it follows him wherever he goes.

Is this the building that the two architects serving on CB1 were involved with its design in one way or another?

This is something the Borough President should insist our Community Boards comply with.

Queens CB1,CB11 and CB 12 don't do the Pledge.
Wake up people, It's un-American not to recite the Pledge.

It's "un-American" to cite the Pledge:

The Pledge of Allegiance: Sieg Heil?

Oh, but CB#1 does recite the pledge.

The building is owned by a doctor who works across the street. His name is Dr Touliopoulis, along with his office manager, Gianni. That is what I was told.