A 2nd Walk Through the Meadows, part 1 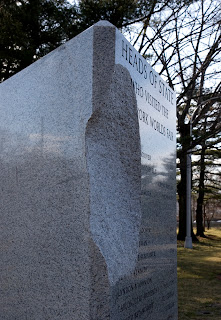 The Heads of State monument has been previously mentioned on Queens Crap, but since it's in Crappy's neck of the woods, he took a stroll down to the other end of the park for a closer look. 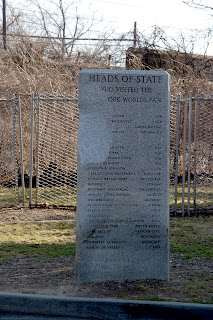 For anyone who doesn't know the story, a bus heading to the tennis center hit this monument last summer and knocked it over. After leaving it lying on the ground for months, the geniuses at the Parks Dept. decided to try to upright the monument. Well, when they did, a huge piece fell off. Good move, guys. Better yet, instead of taking the monument off to be repaired, they simple left it standing there with the huge chunk missing, a disgrace to the leaders it was meant to honor. Now it is one item on a long, long list of things that need to be repaired in Flushing Meadows Park. 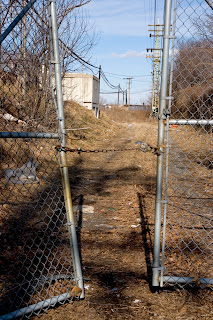 Right on the other side of the tracks next to the tennis center, Crappy found a little gappy. This path leads right up to the high-speed, electrified LIRR tracks. Crappy doesn't want children or vandals finding their way onto the tracks, so he called 311. He hasn't been back to check on the status yet. 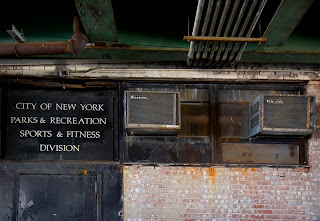 At least the Parks Dept. is consistent in its neglect of Flushing Meadows Park. Their own offices are a disgrace just like the rest of the park. 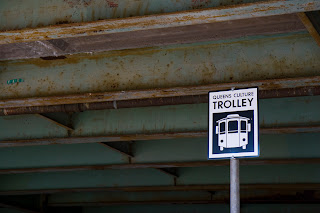 First stop on the Queens Crap Trolley: the rusty underside of the promenade. Is this the kind of image we want people to associate with the culture of Queens? Crappy thinks we can do a little better.

Posted by Queens Crapper at 1:00 AM

Don't you too just love living in a toilet?

#1 on the list of repairs for the park are the removal of Benepe and Cooper to the recycling bin!

What a disgrace. Hey Crapper please help us flush this current parks administration down the toilet. If they don't go down the first time we must keep flushing away.

If that doesn't work we must call Roto-Rooter... and away goes Benepe down the drain...Roto-Rooter.

Start the flushing with loathsome Bloomberg!

Benepe, Lewandowski, Cooper and the rest will skid right along behind him.

To remove all stains, use just one sheet only.

As of this week $75,000 out the window, they could have replaced the stairs and re-lamp'd a whole tower.

Sombody need to ask Estelle Cooper Where is that half million+ $$ of the people donations raised for the NYSP at Terrace On The Park last year ?

THESE "SUITS" ALL BELONG ON RIKERS ISLAND MAKING NEW FRIENDS !!!!

It's interesting to note that the person on the number 2 position (what's left of it) was, I assume, Franklin Roosevelt who died in 1945. He visited the first Fair in 1939. Ergo, the inscription is incomplete: the wording should make note of the TWO Fairs held at the site. (Incompetence compounded.)

But in any event, this destroyed monument is a disgrace.

Helen Marshall! Please put the fork down and get off the buffet line and get your ass in gear! This is in plain view for the world to see. Media of the world bring the cameras and shoot away.