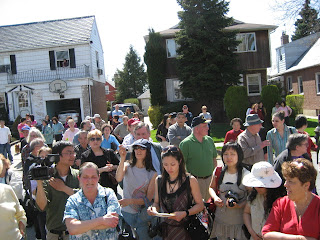 It was a beautiful Saturday afternoon and the Rally went well with a fairly large crowd of 70 to 75 +/- people turning out by the scheduled starting time of 3 PM. 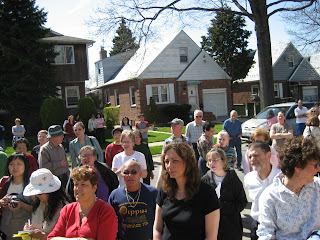 More people arrived as the rally was underway. 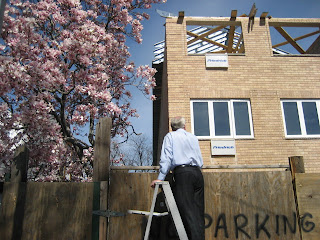 Neighbors from 185th Street brought a ladder so Councilman Tony Avella (and later others) could get a good look over the fence at the building under construction at 69-57 185 Street. 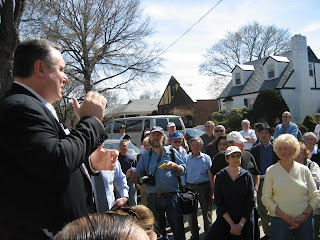 The first speaker, the Fresh Meadows Homeowners Civic Association, Inc. (FMHCA) President Jim Gallagher, addressed the orderly and well behaved crowd that had gathered. Mr. Gallagher then introduced one of the neighbors from 185th Street who spoke about some of the history regarding what the owner had initially told several residents of 185 Street; that he would be renovating the property and that he would be moving in with his daughter (he allegedly told some that he was moving there with his son) to occupy a two (2) family home there.

That is what he may also have led the people at Chase Home Finance, LLC and JPMorgan Chase Bank NA, with whom he secured mortgages totaling over $700,000, to believe. In those mortgages he specifically agrees to "occupy the property" (which he never did) and use it as his "principal residence" (he didn't do that either) and he will "continue to occupy the Property and to use the Property as my principal residence for at least one year" (he didn't even get close on that one). The mortgages further state that the Borrower had an obligation to "Maintain and Protect The Property" and he agreed (by his signature) not to "destroy, damage or harm the Property" - "or substantially change the Property." Well, he not only tore down the house that was there but he ripped out the entire foundation. That's certainly not what the owner had agreed to. 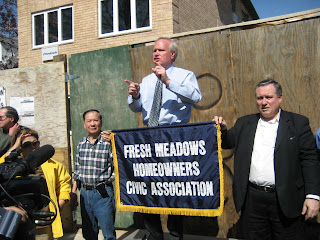 Councilman Tony Avella was introduced next. He spoke about many of the issues that were of concern including:
1) The Department of Buildings handling of complaints, resolution of complaints, self-certification of plans, work continuing when contrary to the plans, Building Class & Use Group (1, 2, 3 family or 6 family?) and DOB's response to the concerns of local residents.
2) The telephone and cable lines that are obviously running into and through the building under construction which the owner said he had permission to do but which Councilman Avella reported that VERIZON informed his office that "the developer did not have permission to redirect the wires through the building."
3) Safety and Fire Department issues because the building will not face the street (it faces side of the home next-door), has only one (1) common front door for access and egress for a six (6) family, three (3) story dwelling, fire retardant materials for stairways and doors, sprinkler system, the access for a Fire Truck & turn around space, access to a Fire Hydrant, Fire escapes, etc.
4) Environmental issues including water & sewer (sewer plans need to be reviewed), other plumbing, and water runoff (especially important since most of the lot will be covered by the building, driveway and parking lot).
5) Size of yards - Side yards [one side has a driveway leading past the front entrance to six (6) parking spaces at the rear], front [distance from the street & sidewalk and line of sight past the neighboring homes] and especially the back yard much of which will be a paved parking lot for six (6) cars [1 parking space is required per dwelling]. 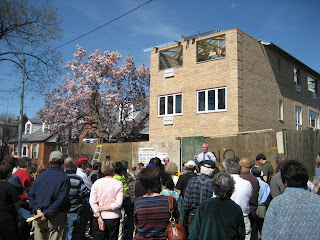 Other issues that came up during the Q. & A. with those gathered and immediately after the rally included concerns about:

1) A six (6) dwelling building with three (3) bedrooms per dwelling (as per the plans) means that there will be an 18 bedroom building where a 1 family home stood before and if this building is not sold as is or as condos (another question which Councilman Avella is addressing with NYS Attorney General Andrew Cuomo) then the owner might rent these bedrooms out and if there were to be 2 people occupying each bedroom (like a college dorm for Queens College of St. Johns University) that would mean that there could be as many as 36 People occupying that structure.
2) The new roof - pitch, access, fire proof, etc.?
3) The basement - type and number of boilers & venting? Laundry room draining and dryer venting?
4) Per cent of lot coverage (80%) ?
5) Size needed for each of the six (6) required parking spaces and access to them and required distance from property lines? 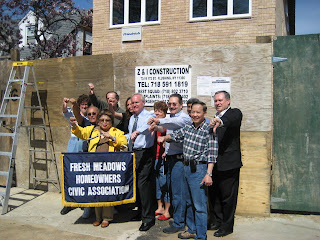 I hope all our efforts will yield some good results. So many people contributed to making the Rally happen, including all those who took time out on such a spectacular day to stand together as members of a concerned community. It could not have happened without the united support of the neighbors on 185th Street, Jim Gallagher & the Board and members of the FMHCA, and Councilman Tony Avella. There's no way to tell what will finally happen - many outcomes are possible - we'll have to wait and see how all this plays out ... by coming together as a community and pressing the issues we at least have a chance to effect the outcome.

It has been said that BAD things happen when GOOD People see wrong things happening and do nothing. Those who have been involved in the planning and those who showed up for the Rally know in their hearts and minds that they are not standing idly by, they are doing something!!!

Events have been set in motion - departments and people have been put on notice - stay tuned for more !!!
Posted by Queens Crapper at 9:43 AM

There once was a building in Manhattan that exceeded the allowable number of floors that it was permitted to have under the zoning code.

They were forced to remove 3 floors to bring the building into compliance!

The case made history!

We need to see the same thing happen in Queens.......if there are, indeed, such numerous violations in existence.....the Fresh Meadows building should be torn down!

Only by setting such a strong example do we discourage any future lawbreakers!

The bank should pull the mortgage because the agreement was violated. Will they? Probably not and DOB will "forgive" all violations and the house will stand as a blockbusting eyesore.


Bravo.....Tony Avella for Mayor. He's the only one standing up against the violators at the expense of being on "the outs" with his collegues!

Wow this civic assn got 75 people to turn out for this event on a beautiful Saturday afternoon? And they didn't call have to call in favors from the PTA or the unions? Amazing! Pinky: take note.

Apparently the only support the councilman from Middle Village could get at his rallies or meetings is when he pays people to show up.

I was speaking with a neighbor here in Fresh Meadows, he was told to show up at two Gallagher events. He was complaining about his union leadership for making him go. He said he had to sit through some real BS but left early. He said several unions from all over the city sent their people.

Fresh Meadows has a Councilman who cares. Refreshing isn't it?

Let us please remember that all Gallaghers are not created EQUAL.
Please get your Gallaghers right - PLEASE !!!

We have to be thankful for a guy like Tony Avella who, when introduced at the rally on 185 Street in Fresh Meadows as "Politician", quickly replied that he prefered to be identified as an "ELLECTED OFFICIAL".
BRAVO !!! He's got my vote !!!

AVELLA IS A CRYBABY WITH NO CREDABILITY.

I SEE YOU MAMAGED TO GET GALLAGHER IN THIS TO. WHY DONT YOU IDIOTS DRY UP AND BLOW AWAY.

I see you still haven't finished the Mavis Beacon typing program. Either that, or you are just that stupid.

Of course we got Gallagher in this. Gallagher was at the rally. JIM Gallagher, that is. The Pink Councilman was nowhere to be found. And that was a smart move because he would have been booed.

Avella is the joke of the Queens Delegation. Hey Tony move the pool you fool!

Anonymous said...
"Avella is the joke of the Queens Delegation. Hey Tony move the pool you fool!"

When we refer to Gallagher's malignancies (nearly always using Spell Check, a dictionary, or our greater than 3rd grade education), we identify his defects.

Bad spelling Anon is too lazy or stupid to spell out her gripes about Tony Avella. Try to avoid wasting people's time by writing bumper-stickers.

How do I know Anon is a "her"? Only girlies write like she does.

This will be dutifully reported in the press:

1. The man is a hard working immigrant
2. He needs the building’s income to send his kids to college
3. The building will house his mother (and her sister, and her daughter’s six kids their … (at this point the editor will step in to ‘tighten’ up the story so that it remains ‘focused’)
4. The neighbors are a bunch of Archie Bunkers who don’t like him because he is from (fill in the blank)
5. The buildings department is “looking into” the issues
6. Again, sympathy for the fellow as he is trying to become an American success story.

Oh I see, because he's a hard working immigrant he's above the law. Sorry for not getting that...

Now I'm convinced. I'm going to give up my American citizenship and re-enter the USA as a new immigrant and become a part of the new great American success story by promptly breaking the law.

Then I can begin my new livelihood in real estate management by renting an unsafe illegal converted apartment to some even less unfortunate immigrant than myself.

If my tenant should burn in my poorly converted fire trap.....I'll just put in a claim and collect the insurance money and rebuild!

Then it's time to bilk a new unsuspecting tenant!

You gotta love this country and its various crooked politicians.....and did I forget our "illustrious" DOB!

Thanks for making this all possible.

My immigrant grandfather would have cried over this kind of dishonesty, because he got his stake out of America without breaking the law!

He taught his children and grandchildren well and they all followed HONESTLY and proudly in his footsteps.