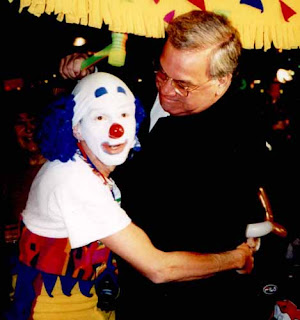 Flushing Meadows Park is once again the whipping boy for the city administration’s lack of foresight. Much banter in the press has swirled around the coming parking lot crunch anticipated by new stadium construction. In the end, the lawns and ball fields at Flushing Meadows Park are where the city’s brain trust plans to place the brunt of Shea’s parking spillover, and did just that on opening day.

The park — scantly protected in the past — was bustling with police in an absurd scene of all cops and no people. Police cruisers guarded row upon row of empty cars; black-clad mounted patrolmen zipped around the windy park on motorcycles as empty shuttle buses dutifully made their appointed rounds.

Even the flooded roadway that has for months impeded pedestrians attempting to circle Meadow Lake was on this day being pumped dry so as not to hamper car traffic exiting the park. A hundred yards north of the rapidly vanishing puddle stood two unmanned podiums that held the key to this bizarre ghost town scenario: “Parking $14.” The business-minded administration obviously wanted to give the paying customers their money’s worth.

And what of the many users of the park’s recreational facilities? Will they have to share their soccer fields with parked cars? Lay on greasy, pockmarked lawns? Navigate around moving cars while chasing fly balls? Lose more lawn space to encroaching blacktop? Who dreamed up this inane plan? The city had years to come up with an acceptable alternative, and the opening day result says a lot about the mayor’s attitude toward Flushing Meadows.

The non-English speaking immigrant groups that frequent this park throughout the long, hot summer are generally thought of as apolitical, and consequently easy to exploit. Broken and flooded roadways go unnoticed and unrepaired year after year while fresh blacktop is laid over green lawn space to make more parking spaces.

Last summer, the city ran a garden hose outside the boathouse parking field to sprinkle kids on 90 degree days; this, when Flushing Meadows has the finest fountain array on the planet, a display that should run throughout the summer months, but used now almost exclusively to impress visiting big shots, and during the U.S. Open; once again, to give paying customers (in this case the feds) their money’s worth. As to the average park-goer, let them eat cake.

It’s about time to open trade talks with Boston — no, not Pedro for Daisuke — let’s swap Menino for Bloomberg.

The clown that Mayor Menino is hugging actually looks like Bloomberg! Amazing!
Posted by Queens Crapper at 6:34 AM

I thought they were proposing swapping the clown for Bloomberg. I'd give that some serious thought.

I remember the park being used during the building of the 1964 World's Fair as a staging ground for cars, construction equipment etc....even Robert Moses' (marked) personal parking spot.

If anybody thinks that the city is going to respect parkland in an immigrant neighborhood, they must be dreaming!


This ain't Central Park. Flushing Meadows Corona Park Conservancy has no real power like the one its Manhattan cousin has.....just an empty name!

The stadium will come first and the park will, likely, become the world's second largest parking lot.....after the Long Island Expressway!

I'd love to be proved wrong!

"The city had years to come up with an acceptable alternative, and the opening day result says a lot about the mayor’s attitude toward Flushing Meadows."

The result also says much about this mayor's contempt for taxpaying people.

Why trade Bloomberg? Let's dump him now and give the poor moron a one-way ticket back to Boston.

We can do well without his loathing of "Little People" and ass-kissing of the money people.