Kew Gardens has lost another landmark - the undesignated kind. 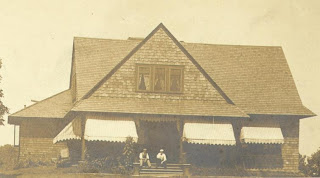 Before it became an upscale housing development in the early years of the 20th Century, Kew Gardens was the site of the nine hole Richmond Hill Golf Course. Using today's landmarks, the club house was located at or near Beverly Road between Audley Street and 83rd Avenue. 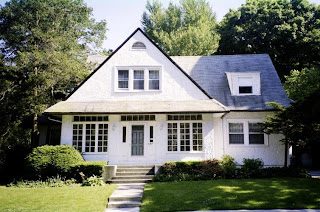 After the golf course closed, the club house was moved further down Audley Street where it survived in somewhat modified form as a private residence until 2005. Sadly, new owners have renovated the old house out of existence. Feel free to use my name and web site if you wish.

Well Joe, it looks like the owner of this property applied for an alteration permit but instead proceeded to tear the thing down to its foundation and build a brand new piece of Queens Crap in its place. But that's nothing $800 won't fix.
Posted by Queens Crapper at 1:00 AM

With their over-sized columns (sans appropriate capitals) and huge (someone discovered arched windows10 years ago) etc.......you'd think some "little-wanna-be-king" lived there!

What no circular driveway or cupid fountain spiting water?

The owner better have a rebuilt Bently (even if it's got a Chevy engine) out front to "impress" those who pass by . No......it'll probably be an SUV or two!

perhaps i'm the only one who doesn't see a problem with tearing down an old golf clubhouse. nostalgia's great, but since the clubhouse wasn't declared a landmark, i don't see what harm was done. was the new owner supposed to restore the clubhouse and charge admission for tours?

The problem is not so much that they tore down the golf clubhouse, but rather that they replaced a small scale home with a piece of oversized crap.

Little wanna-be-kings and queens are exactly what dwells in these pieces of feces.

I understand that nothing lasts forever, and that property owners have a right to renovate their property in whatever style they like. But I can still feel badly that the old club house is gone and wish that the new owners had made different architectural choices.