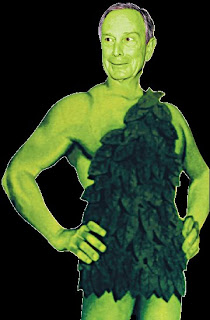 Yesterday was Earth Day and the mayor laid out his plans for the city's long-term sustainability, including congestion pricing:

"It will be a real problem for operations for trucking companies and shippers, including all the retailers in Manhattan, which is substantial," said ATA spokesman Clayton Boyce. "And all the people who get FedEx and UPS deliveries will have problems and will bear extra expense, so we definitely see problems with it."

Bloomy Lays Out Plans for the Future of NYC

Even if it passed, it is not likely to be in place for some time. City officials say they need a year or so to upgrade some mass transit options like express buses, because in many cases, New Yorkers drive into Manhattan from the outer boroughs because they have no viable public transportation in those areas.

1. The plan has done little to lower congestion in London
2. It is a financial boondoggle
3. It's unfair to the poor
4. People hate it
5. They'll get you anyway

Then there's the re-zoning and 10-minute-walk-to-a-park answers:

"The plan calls for zoning changes in many neighborhoods with access to public transportation that would allow for larger homes and a higher density of housing, although such changes are often resisted in those neighborhoods.

Bloomberg Draws a Blueprint for a Greener City

It pledges that every New Yorker would live within a 10-minute walk from a park, and it calls for small public plazas in each community board district that does not have a park."

The mayor said his administration would consider constructing decks over rail yards, rail lines and, incredibly, even congested highways [for new housing].

And here we thought the 2030 Plan might actually be something revolutionary. Rather, most of it appears to really be the same old shit repackaged with a fancy label.

The entire 2030 plan may be viewed here.

Green Giant cartoon from AM-NY.
Posted by Queens Crapper at 6:03 AM

A greener New York in 2030....h-m-m-m.....judging from the money filled pockets of Bloomberg's real estate buddies (and our fat-cat politicos).....we're already there!

Another plan from Bloomberg with absolutely nothing behind it.

Dear Crappy,
I'm still trying to recover from the image of Mayor Poppins and Pinky the Mad Jester that still gives me nightmares.

Now you hit us with Bloomberg as the Green Giant. Stop I can't take it! It looks likes a green turtle head on a man's body.

Run away and don't look back!

AM New York gets the credit for the Jolly Giant.