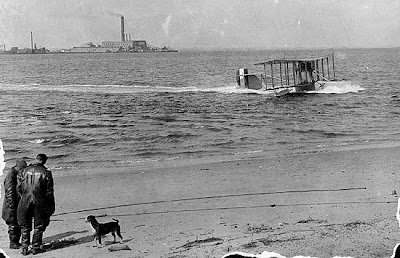 There's so much congestion at the airports that the city is now considering landing planes on the water again:

A spokesman said one option Mayor Bloomberg is throwing his support behind is a plan that could replace some airline shuttles that fly to and from East Coast cities with seaplanes — fixed-winged aircraft that take off and land on water — which could be used to pull traffic off overcrowded runways at the three regional airports that serve New York.

Hoorah! glad La Guardia saved the Marine Air Terminal (I think the ramp from the water is still there intact....but blocked off).

It would be nice to see something similar to those impressive Boeing 314s ("Yankee Clippers") flying boats again (provided they're anti-polluting and safe) !

Check out the "History of Flight" mural which surrounds the Marine Air Terminal's rotunda next time you're at LGA....it's landmarked!

As someone who is intimate in the history of Queens aviation, I am surprised that there is little information about an airport that pre-dated LaGuardia Field. I am referring to Holmes Airport (aka Grand Central Air Terminal) which was located in Jackson Heights where the Bulova facility is now.

The field hosted many historical events and was the hub of aviation in the area for several years. Goodyear built a hangar on the property for year round blimp operations.

I believe that the land became a prime target for development and the land close to the bay, which was an amusement park, became North Beach Airport (now LaGuardia Airport).

Flushing Airport was in operation since the 1920's and closed in the early 80's. For a little over a decade, at least one Goodyear blimp would use the College Point facility as a base while visiting New York City. I proposed that the property continue to be used as a blimp base but the EDC apparently had other plans.

I then thought about a river-based operation but was told that it would never be allowed. Blimps are a heck of a lot safer that other aircraft but safety was a concern.

Now our bonehead mayor see a commercial viability and safety concerns will be thrown out the window? Boats of various sizes use both the East and Hudson Rivers and adding aircraft to the mix is an accident waiting to happen. Mayor Moneybags once again shows a lack of concern for people in order to promote commercial enterprise.

Aircraft flying low over Queens as the approach an airport? I just have a bad feeling about that, especially since no one has the foggiest notion who lives here.

Frankly, an inner city airport makes as much sense as a helicopter pad on the MetLife Building or a blimp dock on the Empire State building.

It is an idea that has outlived its usefullness.

I agree with that posting. Congressman Ackerman encourages (or at least does nothing) about illegal immigration.

Every time I see a jet landing and flying low over Elmhurst (more than one per minute) I wonder who has what where just a few hundred feet under its nose.

Alan, you would be interested to know that the Queens Historical Society has, I believe, in its collection some B/W vintage 16mm film clips (transferred to VHS video) that may include Holmes Airport......if I remember correctly. (It's been a while since I served on their acquisitions committee).

I think it was donated around 1990-91. These clips also show the construction of the IND Subway line (I guess it was the Roosevelt Ave, Station).

Give them a call.

Thank you for that piece of information. I have a lot of material to offer in trade, specifically about Holmes and Flushing Airports. I believe our history needs to be preserved. How do you know where you're going if you don't know where you've been?

I was just wondering if anyone heard the airplane that was flying low over Queens on the 8th around 4 pm. I live in maspeth and i heard a plane flying so low i thought it was going to crash into my house. just wanted to know if any one else heard it.