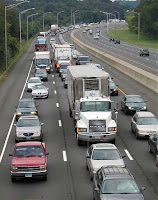 The Daily News exposes which city residents are most likely to drive to work in Manhattan, such as this guy:

Joe Lee, a city engineer who lives in Whitestone and works downtown, said if he ditched his car he would have to take a bus and two subways each way. "To go by public transportation it would take an average of an hour and a half to two hours," he said. "If I take the car, it's a much saner commute."

Have a pro-pricing editorial by Gridlock Sam, who says the plan needs some tweaking, like:

Apply congestion pricing to transit. Reduce the bus fares in the subway-less neighborhoods to $1.

Report that average Londoners are split over whether or not the plan has been good for Britain.

And report that the boys and girls upstate are none too pleased with the plan:

"Nobody wants to cross the mayor right now in public," said one Republican legislative official. "But at the end of the day, is this going to go anywhere? No."

Meanwhile, the cost of taking public transportation is soon to increase, reports Metro:

And John Liu has his opinion:

Great, no congestion pricing but lets increase the subway. More costs from development on the back of the little guy.

Developer in Limo in Manhattan: $0.00

Taxpaying snook in Subway to Mahattan: $2.50

Living in a one party society: priceless

It's pretty scary when John Liu sounds like the voice of reason.

allow commercial vehicles on the belt parkway? what is gridlock sam smoking? as it is, the belt is basically a toll road for the verrazano bridge that can get backed up for miles. why not add more congestion on top of that to suit bloomberg's twisted plans? these people live on their own little midtown manhattan elitist planet.