Fakin' it may be makin' us sick 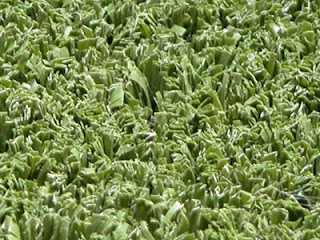 There's a lot of controversy over the city's decision to use rubber pellets in its artificial turf, without first allowing the material to be thoroughly tested for negative health effects:

Last year, researchers from Rutgers University found the pellets — which give the borough’s newly refurbished athletic fields a buoyant, soil-like feel — are made of recycled tires that contain high concentrations of a cancer-causing chemical, polycyclic aromatic hydrocarbons...Studies also found levels of the highly toxic benzo(a)pyrene at more than eight times the state’s acceptable level for regular dirt samples, experts said.

Gallagher seconded Benepe’s endorsement of synthetic playing surfaces by imparting, “It used to drive me crazy to watch government invest sometimes $1.2, $1.3 million to take a ball field, replace it with grass, and then [after] a couple of football games, a couple of rainstorms ... before you know it, there was a dustbowl again and it was a waste of public funds.”

There's something that's even more of a waste of public funds...
Posted by Queens Crapper at 3:52 AM

What is Adrian Benepe hiding? Could it be this issue will be the one to finally expose the worst Parks Commissioner in the history of Parks?

After selling off acres and acres of parkland to big business, letting cars park on grass and ruining trees, Benepe is now replacing real grass with plastic crap that could contain enough toxins to be declared a brownfield.

OUST THIS JERK BENEPE NOW OR DUMP THE MAYOR!

Think of it.....all the money that used to be spent by the Parks Dept. maintaining real grass can now be put to some other use!

Just what that will be is highly suspect!


Imagine a Parks Dept. that is an advocate of artificial Nature!

Benepe must be on a nostalgic 1960s kick as well as on LSD!

Think of the impudent arrogance: A research scientist raises questions regarding the carcinogenic effects of this artificial turf.

Bloomberg, who never passes up an opportunity to show his contempt for the public, will not permit the scientist to research the product to get to the facts.

What's in it for Bloomberg that even though he condemns smoking, trans fat and obesity, he promotes a product that might be cancer causing?

What was in it for Bloomberg to say OK to smoking, trans fat or obesity? Nothing?

But, this artificial turf manufacturer is the source of big money!

Screw anyone who might get cancer. They're just Little People, anyway!

Is Mr. Gallagher aware of the potential problems with synthetic fields. Has he been reading the news?
You would think a NYC council member would be aware of what's happening.

I have one better, Gallagher sits on the Council Parks Committee. Trouble is we never heard what he does on that committee. Obviously nothing.

BENEPE IS HIDING SOMETHING.

MY KIDS PLAY SOCCER ON THE ARTIFICIAL SURFACE IN FLUSHING MEADOWS PARK. THEY ARE ALWAYS COMING HOME WITH THESE BLACK RUBBER PELLETS IN THEIR SHOES. SHOULD WE BE CONCERNED?

this guy gallagher is a criminal. he problably has some stock in a tire company that makes this stuff.

Why isn't Denis Gallager calling for an investigation into the Parks Department's handling of this controversy?

YES Oscar, you should be concerned. You should write to the Mayor about your concerns.

If you write to Bloomberg you may get a form letter response in 3 months. Maybe. Oscar, I wouldn't waste my time writing. Take your kids somewhere else and let the dogs crap on this stuff.

JakobSportsInc said...
"Why isn't Denis Gallager calling for an investigation into the Parks Department's handling of this controversy?"

When the Mayor persists in requiring to continue an obviously dangerous activity, we all know that money is changing hands.

And, do write to Bloomberg. Demand that he understand that we rule, not him. He is simply the administrator.

To Park Lover: I did write the mayor about cars parking on the grass in Flushing Meadows Park. I got a response 12 weeks later from Commissioner Benepe telling me all the great things that were happening in the park.

I play soccer at Juniper Valley park and downtown Manhattan -BOTH FIELDS ARE FAKE! And in the summer... If I want to watch a soccer game at the field... it is impossible to lay down because the rubber pellets absorb so much heat from the sun!!! It leaves your skin red! Leave a spare tire in the sunlight for 10 hours during the summer heat - see what happens!

When the rubber heats up you also smell it, that means you are breathing it and this is settling in your lungs. Potentially VERY DANGEROUS. Anyone with a child playing on this surface should be very concerned.

Let's place asphalt over all our degrading councilmember's front yards with hints of artificial grass in between. Let them get a taste of their own medicine. Then we'll show how Benepe is in cohoots with the councilmembers & vice-versa. It's simple: Scum endorses scum!

My daughter have been playing on Asphalt Green artifical surface in Manhattan. Does anyone know if that field contains these pellets?

Gallagher said “It used to drive me crazy to watch government invest sometimes $1.2, $1.3 million to take a ball field, replace it with grass, and then [after] a couple of football games, a couple of rainstorms ... before you know it, there was a dustbowl again and it was a waste of public funds.”

Ever hear of maintenance councilman? That's something we never hear from you or any other councilperson on the parks committee.

Why don't you plant artificial plants and trees too while you are at it.

Write to Bloomberg. Write repeatedly. Enlist your friends and neighbors to do the same.

You don't have to be Shakespeare; he's an illiterate fool anyway.

He replies with a form letter? Write again and demand he get involved and have an independent lab test this turf and report publicly.

He won't reply to Little People? Write letters to the editor. Bloomberg doesn't rule NY. WE rule NY. Bloomberg either gets off his high horse and deals with this or let him get on his horse and head back to Boston.

Just remember, if we get rid of Bloomberg, all his lackeys will go too.

HEY PARKLOVER: Get out from behind your computer and take to the streets and protest! That'll get that billionaire bastard's attention.

Benepe is a synthetic commissioner.

ANOTHER PARKS DEPARTMENT COVER UP.