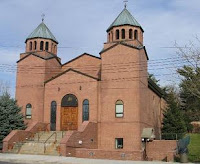 The battle over a city-owned lot next to an Armenian church that wanted it for a day care center continues at the community board level:

"The issue has become a political football as well. State Sen. Frank Padavan (R-Bellerose) has supported the church's proposal and called on the city to make the nearby PS 98 playground a park that is open for longer hours. Councilman Tony Avella (D-Bayside) has called for a park on the vacant lot."

Photo from St. Sarkis church's website.
Posted by Queens Crapper at 1:07 AM

What is not mentioned is that right next door to St. Sarkis is a daycare center that already serves the community, there is no need for another one.

Who needs a park? It will just attract noisy kids, people littering the ground, and vandalism.

Of course, if Queens had a good Parks Dept, it would be regularly maintained, and a greenspace for the community.

But those things don't bring in votes, so who cares? Besides the Parks Dept is a mess.