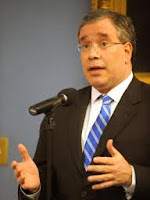 Mr. Stringer, a likely candidate for mayor, does not have the power to restore the tax in his current post and would not be able to do so even if he were to win the mayoral election next year. Any new tax would require approval by the State Legislature.

But a revival of the commuter tax, which was in place for 33 years before it was eliminated by the Legislature in 1999, has been quietly promoted for years by transportation experts who argue that the Metropolitan Transportation Authority needs more-dependable sources of revenue to avoid routine fare increases and service cuts.
Posted by Queens Crapper at 12:36 AM

no new taxes , cut the waste from city and state government spending now.public union contracts must be made sustainable for the taxpaying private sector to survive.

His name is Stringer
because he's tied to dull hack government-as-usual apron strings.

This lackluster mamma's boy can't possibly run NYC, which is a yeoman job.

Like it or not, politics is all about cutting deals.

Scott can't cut a deal to buy a roll of toilet paper without "mommy's" instructions.

Look at what NYC got with mayor David Dinkins.

What a loser - no taxes - cut taxes or shut up and take a pay cut.

Eliminate the matching funds for candidates seeking to run for public office.

Every Tom, Dick and Harry who thinks he can make the grade has his hands out for public funds.

It's beginning to look like amateur night at the Apollo theater.

Darwin, himself, would have pointed out that if you can't raise the money by yourself then you aren't fit to be in the race.

Next,
eliminate community boards and the office of borough president.

They're both shams that eat up a bundle of money.

That's only the beginning.

There's plenty of money around if we can only cinch up the jock straps on some of those big political egos out there.

What other simplistic solutions are you offering for our complex problems?

The commuter tax was eliminated because it was killing jobs in NYC. If it were enacted again, it would again kill jobs in NYC.

Tired of parasites from other counties and other states leeching off this city, then taking their money and running elsewhere.

Its a drain on the system, and it should be compensated for.

" Anonymous said...
The commuter tax was eliminated because it was killing jobs in NYC. If it were enacted again, it would again kill jobs in NYC."

Sorry, but the we weren't Tea Partying like its 1999, back in '99. BTW, the NY Post boards want their slogan back.

The commuter tax was repealed (surprise!)due to parochial NYS politics. Only Shelly Silver could permit the repeal to occur, so why would he upset his NYC caucus to do so? He wanted to protect his supermajority in the Assembly. To do so, he threw NYC finances under the bus to lend support to Ken Zebrowski, a Democrat running in a special election up in a Rockland Co. AD.

Well, Ken won, Shelly still has 99 Dems under him in the Assembly, and here we are talking about closing 20 firehouses again. Good deal! Thanks, Shelly!

Right person, wrong reason. Silver did it because he thought that it would help the Democrats take control of the State Senate.

I stand corrected. Ken was running for the Senate that year in a special election.

I love those Anglicized names
that people of the Jewish persuasion give to their sons.

She ain't scared of nobody
ever getting over on her.

She sure knows how to lick 'em!

New York is a tough town.
It can't be managed by a wimp like Scottie boy.