Something not quite right about this... 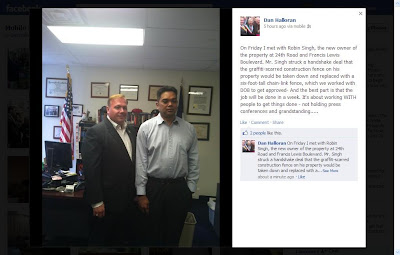 This is curious since DOB records show that there is still a stop work order in effect and DOF's ACRIS records show no change in ownership since 2009: 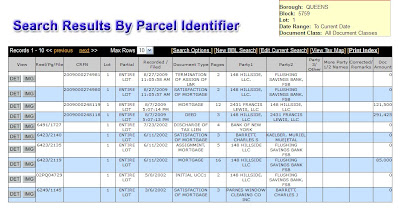 What are the "new owner's" plans for the lot? I doubt it's just to beautify Whitestone by planting flowers, as Halloran laughingly suggested to the Courier:

“[Singh and I] both had the same idea of sowing wildflower seeds on the property in the hope that after all these years, our neighbors deserve some beauty, instead of a ghastly eyesore,” Halloran said.

(A challenge for those of you who like brainteasers: How many grammatical errors are contained in that sentence?)

I pray that I am wrong, but to me it sounds like another "bend over for the BSA" opportunity might be heading Whitestone's way.
Posted by Queens Crapper at 12:53 AM

Dan is mighty close to Singh's ass and we can't see exactly what his hand is doing.

Maybe he's run out of females to pork.

Has "doofy" Dan switched his orientation and going for "beef" these days?

Then again, he might just be picking the man's pocket to help pay off his mounting bar tabs.

HOLLERIN HALLORAN BENDING OVER THE COMMUNITY WHAT A SURPISE

MAYBE THIS IS THE NEW PIAZZA ITALIAN LOCATION

MAYBE ANOTHER BULLSHIT LIE BY OUR COUNCILMAN

WHAT A WASTE OF TIME

Halloran is in the middle of it.

Our pathological liar of a councilman
has screwed his district once again.

how is Alex Lombardi involved in this ? rumours are floating around about some issues in his past.

i have been active in many complaints to the D.O.B. in our civic assoc. area in bayside, for many years.
the complaint recording on the website is mostly in error , double talk rambling by inspectors,very late and often omitted.

sometimes they get it right the first time . thank fully SOME of the public servant union employees can do their job competently.

if the property owner does not follow the response rules to his violations ,they will remain on his record for many years......

that being said ,dealing with the D.O.B is "SHOVELING SAND WITH A PITCHFORK".

citizens do not need bigger government,they need enforcement of the laws on the books.

47 lib/dem. city councilman and 1 rino mayor . does that equal A CHECKS AND BALANCE LEADERSHIP ?

Crappy when are you going to break it? No other media outlet has the balls!

Whats all the buzz about the Marino market?

Whitestone is about to get fucked up the ass by a BSA variance for a building extension and parking lot for Marino courtesy of Dan Halloran. Post coming soon.

Is a Marino's expansion
better than getting a new church built on the site?

Nobody seems to think so.

For starters...
church vehicular traffic would only affect Sundays.

You've been called and raised.

We wonder...
did C.M. Halloran get slipped a stack of "Franklins" for helping to promote this fiasco?

Dan's an Olympic champ at screwing.

Be it a staffer or his constituency..."hooligan" Halloran is always ready.

Has Halloran become a consiglieri
for the Italians?

First it was Joey "d'or" Franco and now it's Peter "the grocer" Marino.

Halloran
appears to be deeply in debt.

No doubt,
his wife has her hooks in him for alimony.

Didn't his house have some liens against it?

And he can't drink on the cuff forever along Bell B'lvd.

ALL these things require serious some money!

So is the councilman for hire?

Yeah, it must be tough to come up with a hundred bucks to go bouncing on Bell when you're struggling along on $10,000 a month.

How did that happen?

Marinos is a great market that serves the surrounding community with the best deli counter in the area. If the neighborhood did not want it, they would not shop there. Instead, you can barely walk in the store because the line for the deli clogs the entrance. -A Marinos customer.