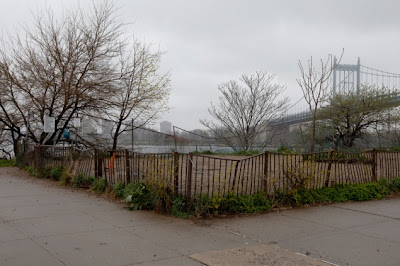 Local dog owners are pressuring elected leaders and city officials to fix up a beloved but rundown dog park in Astoria.

But they’ve run into resistance from fellow dog owners and the run’s unofficial caretaker. It is also unclear which city agency is responsible for the waterfront property that Bugsy’s Dog Run sits on.

“My goal would be to establish a community-sponsored dog run,” said Dan Cain, 33, of Astoria, who is leading the latest charge to renovate the run.

“The dog park itself is falling into the river,” said Cain, who added he and other dog owners would be willing to chip in for the repairs. “It’s dirty, it’s filthy and it’s unsafe for dogs.”

Cain, who has an eight-pound toy fox terrier, said he’s afraid his dog could get injured in the rocky run, which is not partitioned into small and large dog sections like most city runs.

But he said some dog owners don’t want to make improvements to the run because they fear the city will stop allowing dogs off-leash in the early mornings and late evenings at nearby Astoria Park.

Other dog owners said they worried if enough attention was brought to the poor condition of the run, with its rocky terrain and sloping fences that have gaps in some spots, it would be closed.

Long time readers may recall that QC visited this spot in 2008.
Posted by Queens Crapper at 12:36 AM

This is not Manhattan/Union Square, no politician cares about your dog runs/dog parks.

Got that right - a developer will take over the location and make it a nice dog run and the local weeklies, flush with his ad revenue will sing its virtues.

When they open it all the pols will flock to have their picture taken with the benevolent developer.

You should go. It will be one of your few chances to see them.