Crowley forgets there are other women in Congress 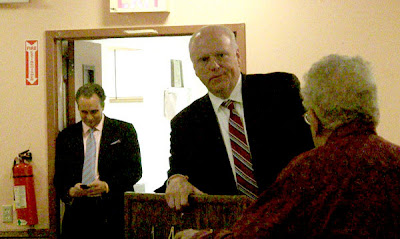 At the Forest Hills Civic Association meeting Tuesday night both U.S. Rep. Joe Crowley and Assemblywoman Grace Meng tackled questions about the upcoming Democratic primary — in which Forest Hills will be a key battleground.

Already, the race has seen its fair share of drama, with the retirement of U.S. Rep. Gary Ackerman and the revelation that four Democratic contenders have an interest in the newly drawn seat.

Crowley, answering questions from a resident who said he was concerned about the overt role that ethnic politics was already playing in the campaign, said he felt now was the right time for New York to send an Asian-American legislator, and a woman, to Congress.

“I believe in this [race] we had an opportunity to send the first Asian-American to Congress from the Northeast,” Crowley said. “We have never done that here in New York and this is an enormously large and growing community, and that was one factor. We haven’t elected a woman in Queens County since when? Geraldine Ferraro right here in your neighborhood.”

Actually, Carolyn Maloney and Nydia Velazquez currently represent parts of Queens, but I guess Joe was only thinking of the ones he handpicked.
Posted by Queens Crapper at 12:36 AM

I am glad he endorses the candidates that he does so that I can fight against them being elected. We should all insure voting against Joe Crowley as this is the single best opportunity to boot him from office. Did you notice how much he is in the press these day? He's running scared folks!

Joe Crowley made it to congress by scamming the electorate. Reject all of his handpicked cronies.

What! He didn't handpick Velazquez and Maloney?! I'll bet he had a say in it...

QC readers might enjoy some of the recent postings on the Politicker website about Crowley, Gottlieb, Meng, and Lancman. At one news conference, Crowley just kept repeating, "Mr. Lancman is mis-informed" over and over.

The guy just looks like a cheap grifter! If his congressional district reelects him then they know what they have. Almost makes you like Republicans.

Anyone who votes for Queens Democrats is either brain dead, a hack, or a union zombie.

Actually, Dan Halloran would be a better choice than any of Crowley's hand-picked cronies. And that's not saying much.

Regarding the Queens Democratic Hall of Lame. What a bunch of do- nothing losers. People better smarten up and vote them out. Most of these politicians(crooks) are brain dead. No wonder Queens is going down the tubes.

Not saying much for halloran is an understatement.. So far he's been a total failure for the citizens in his Council district-except for the developers and restaruanteurs like his friend franco. Who to elect? Write in and keep the two parties out they are too closley tied together in corruption.