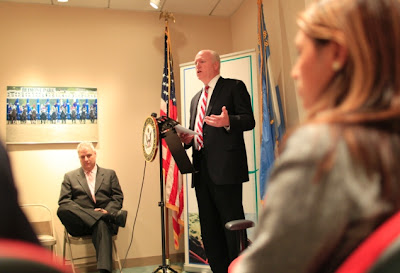 Travel procedures to the United States would be streamlined from three South American countries to boost tourism in Queens under a proposal by a local lawmaker.

Rep. Joseph Crowley (D-Queens, Bronx) unveiled a proposal Tuesday to expand the Department of Homeland Security’s Visa Waiver Program, which allows visitors from select countries to visit for 90 days without a visa.

Crowley hopes to convince the government to add Brazil, Argentina and Chile to the list.

Tourists spent over $6 billion in the outer boroughs in 2010, Crowley said, including 70% on shopping and dining combined.

“We have to keep that number growing,” he added.
Posted by Queens Crapper at 12:14 AM

Quite shocking...Poland is trying to obtain visa waiver for years and is systematically declined. Yet Argentina, Brazil and Chile which are way bellow Poland's economical level are to be accepted.. Go figure out! Such a corason for Latina..

AND OVERSTAY THEIR TOURIST VISAS!

How does one even spend tourism dollars in Queens?

It's a great job of ass kissing Hispanics...90 days for drug dealers (or terrorists)...to have free reign.

I am all for tourism and Crowley is all out for votes. No one arrives to these shore to Queens unless they are staying with relatives or jumping ship to collect the entitlements Crowley's party endorses and doles out.

Look forward to more drunken Hispanics around the Unisphere this summer!

Increasing Queens tourism has been the boondoggle subject for at least 25 years running now.

Let's face it,
Queens is a dull borough without any real attractions.

Tourists shun it and for damn good reason.

Can it compete with the South Street Seaport, the Statue of Liberty, Radio City Music Hall, Broadway, the Metropolitan Museum of Art, Central Park, etc. ?

This is just the latest Dem machine stunt to gain sympathy from Hispanic voters and keep boobs like Terri Osborne in their jobs.

i.e.
Let's say that my poorer cousins from Colombia come into town.
They crash at my house.

They can't afford a week's stay in a hotel for their family, even in Queens.

If you don't like the job your pol has been doing, then fire that f--k at the polls!

"Homeland Security". What is that? This sounds like another Federal Government plan to hand out even more "free money".

Crowley can take his stupid ideas back to Virginia. As for "foreign tourists in Queens" he IS one!!! Crowley, get out of Queens! And stay out :-)

“The easier it is for foreigners to enter the United States, the more likely they’ll come here AND THEN NEVER LEAVE.”

There, i finished the sentence for you Crowley.

Anon #1, why would Poland bother trying to get visa waivers? You been through Ridgewood or Glendale lately? Seems they aren't having a problem getting in!!!

Give us your tired, your poor, your yearning masses hungering to sell overpriced mozzarepas and corn burnt with charcoal for hard currency to send back home and build unplumbed mansions of rebar and concrete.

I guess Virginia Joe views himself as the Latin King. He just loves the Hispanics. Forget about tourism. Queens is a dump. The borough is soooo overcrowded, the streets filthy, no hospitals, overcrowded schools, and no one speaks English. How about cracking down on all the illegals Joe? Then, when you have that problem sorted out, you can invite more of your foreign friends in. The last thing we need to do is make it easier for foreigners to come into this country.

free videos of evan running over the whitestone bridge in tears

These people will come here and get pregnant and never leave !

Them Crowleys sure are big on whoring after all birds of a feather..
Whenever you read of Craighlist whores busted most always from Columbia, Argentina, Brazil and Chile who flew in on visas and never went home

Im most all cases all have several American soil dropped children with different father's. Parent teacher night in Northern Queens schools is starting to look like the woman's ward at the Los Vegas jail !
Ask any Queens school teacher off the record in private its the truth !!

How about putting some BALLS in front of getting our JOBS back from these tourists?

if you want to speculate on why the U.S.Cong. Crowley from QueensCounty /Va. wants more "tourists" from South America, READ:Townhall Mag.,Mar. 2012.,by Brandon Darby

it details the voter registration fraud uncovered by a civic association in HARRIS COUNTY,Houston,Texas,during the 2010 midterm elections.

the district of DEM.Sheila Jackson Lee had over 19,000 instances with six or more voters registered at one address.

over 15,000 multiple applications for the same voters ? over 1100 applicants claimed no photo I.D. when they actually had photo driver licenses???

the investigation targeted a group known as "HOUSTON VOTES", the voter registration arm of "TEXANS TOGETHER EDUC. FUND" and basically served as the area's "new 'ACORN' organization"

is Queens County the next Harris County,Tex. ??????

Anonymous said...
How about putting some BALLS in front of getting our JOBS back from these tourists?

Sorry Boss - Dems have been castrated for too long to know what balls are or feel like. So the tourist rule as you know and we are paying for their sightseeing on a daily basis.

Show Joe the door in November!