Unions allow EDC to walk all over them 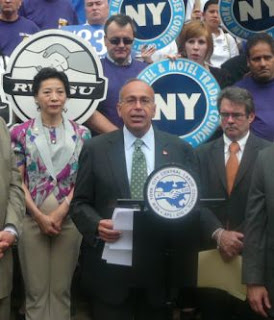 In June 2008, the president of the Retail, Wholesale and Department Store Union, Stuart Appelbaum, stood on the steps of City Hall to praise the city’s Economic Development Corporation.

Along with several other powerful union bosses, Appelbaum touted the EDC plan to jumpstart a long-stalled, $3 billion project at Willets Point in Queens, because he said it would lead to the creation of so-called “living wage” retail jobs for his workers – paying a minimum of $10 an hour.

Appelbaum’s contentions that his members could expect living wage jobs at Willets Point were based upon by a letter penned in April 2008 by Robert Lieber, then the city’s deputy mayor for economic development, to the then-head of the city’s umbrella labor organization, Gary LaBarbera.

Yet this May – when the EDC put out a 125-page request for Willets Point proposals to developers – there was not a single mention of living wage jobs. It did state that developers had to hire construction contractors who would pay prevailing wage and that some building workers would get prevailing wage salaries—but retail workers were left out completely.

Ah, ok. So memory isn't failing me. I remember quite clearly that living wage was part of the Willets Point deal that the Council voted on in 2008. So the City is allowed to renege on its promises and no one bats an eyelash? Well, let's see...Hiram's gone, Katz is gone, Lieber's gone, Marshall is still around but she's useless. Who is going to call the administration out on the carpet for breaking their promises? Whether or not you agree with a living wage, a deal is a deal, and the Council factored living wage into the equation when they voted on the project.

And where are the unions now? Shouldn't they be protesting this major duping by filing lawsuits and holding rallies on the steps of City Hall? You got the rug pulled out from under you, peeps and have been made to look like fools. Why are you taking this lying down? Where are your cojones?
Posted by Queens Crapper at 12:33 AM

Who did the math here? Does living wage mean living with 10 other people?

yet when we bitch everyone ignores us.

Starting with our politicians.

from: "The Center for Union Facts."

% of union members who actually voted to be unionized
=less than 10%.

Its more than this - EDC is really the shadow government that is totally unaccountable and makes up its own rules.

Which or our elected officials has the backbone to investigate them?

And who runs "The Center for Union Facts"?

"% of union members who actually voted to be unionized
=less than 10%."

See, here we have the classic case of a conservative's con-job.

They conveniently omit the fact that the original vote to unionize a given vocation was often taken -decades- ago.

Not too surpring that few, if any current workers didn't get to vote for it.

This sort of thing is just another example of how conservatives use lies and half-truths to mislead people into acting against their own interest.

American union membership reached it's peak in the 1950s -a time when the average American worker enjoyed the highest standard of living in the history of the world.

Tax rates on the highest incomes were also at their highest.

American working people have been seeing decline in real spending power since the early 1970's, the decline of unions is just one factor -but an important one.


As for "The Center for Union Facts" -t is just another shadowy front group of anti-worker shits:

A disgrace that someone here would quote such a 'source'.

Why do you believe that people with no skills at the bottom of the wage scale deserve their own one-bedroom apt? Minimum wage jobs are things kids used to get while they were in high school. You're living with your family or roommates at this wage. It's always been that way.

NY should be a right to work state. Ridiculous that we have forced union membership.

have you checked on the salary and benefits that your union president received last year ? would you dare list them here ?

i am guessing the answer is NO .

Which do you want Crappy, a decent quality of life in your working class neighborhood, or a race to see who is willing to work and live for the least wages and drag down the standard of living with them.

What I'm saying us that thus being America, one should be able to practice their trade without being forced to join a union.

There are always non union companies who will hire a skilled worker at non union rates. No one is forced to join the union.
Now if one wants to practice their trade and get properly compensated for it, they yes, they pretty much have to join the union. The non union jobs are still out there if someone really wants a choice.

Can't compete if the project is a closed shop.

where are all the union members who are satisfied with the $ tribute that they are paying to their leaders ? no listings of salary figures yet ?

a relative of mine was forced to go on strike by his leaders, recently. a H.S.G.E.D, making a salary of $90,000. per year, with benefits, and they strike when unemployment is 9.1 % and 14 million are unemployed. the strike lasted 1 week& some dopes lost their jobs for criminal violence against the mgt.

another relative earned a high six figure salary ,after 16 years in one corp.a college degree and much field training during his employment. downsizing laid off three departments. he was unemployed two years. he finally was hired as a consultant with no benefits .
that position lasted one year with a layoff. a third
firm also hired him as a consultant. he is now again unemployed for four months.

it appears that the union jobs have been subsidized with the $787 billion OBAMA STIMULUS TAX FUNDS for three years.
and the SLUSH FUND GREEN ENERGY INDUSTRY gets plenty of tax payer bailout from the obama DEPT. of ENERGY .

and now the O.W.S. socialist tools, with their local dem. politicians are writing glaring letters of approval to the editors, are being equated with the TEA PARTY PATRIOTS . give me a break.....

it is reported that over 25% of private sector workers, under the age 35 , have returned to live with their parents.

and union leaders push their members to strike.many were seen marching with O.W.S with dem .politicians ???????

"a relative of mine was forced to go on strike by his leaders......"

..And all the rest of your crap. You have so discredited yourself with lies and half-truths that you might as well write this on a public men's room wall.

We ALL know people who have lost jobs for various reasons.

We had a friend for dinner this past Thanksgiving. He has a History Masters and was working for a major publishing co. 'till they outsourced his job to, of all places, India.

He is now a part time salesman at a big-box store on 34th st.

Your god-damn capitalist purity of 'profits first' has gutted the middle class.

I'm in the restaurant business, some of our locations are flat on their backs and we have taken -zero- profits out of them for almost three years.

Yet when a few customers got laid off our managers hired them as waitstaff and cashiers.

Other than wave your stupid 'patriotism' -what the hell have you done for the unemployed.

Those goofy kids down there, and in a growing number of cities are RIGHT. We have allowed the far right to turn us into a corporate oligarchy.

I wonder if Lino's restaurants are unionized or if he hires wetbacks.

if that commenter was really LINO,THE LIBERAL LIAR. he is" Commander" of a fleet of illegal alien restaurant bike jockeys,on the upper east side. ZIP CODE 10021, the highest income and taxpaying citizens in the nation are his clients.

among them, live the RICHEST LIMOUSINE LIBERALS in the world.

And we have people here who have the same RepubCon DNA as the "reporters" at Fox "News".